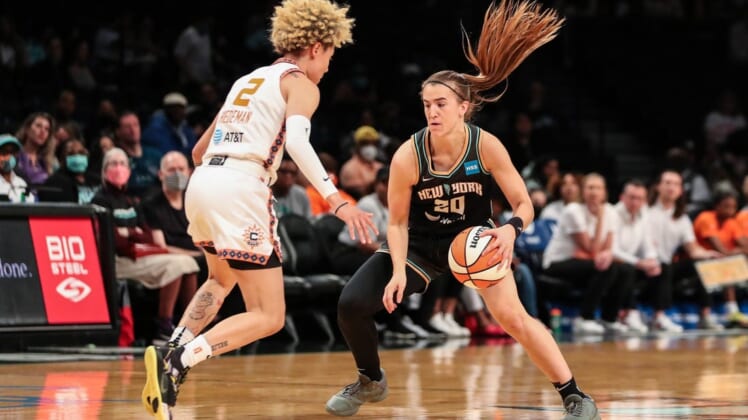 While Jonquel Jones was unable to be in the arena after testing positive for COVID-19, the Connecticut Sun were in position Sunday to beat the Las Vegas Aces until they started making mistakes.

Jones will be out again Tuesday morning and the Sun will look to correct some of their miscues when they host the visiting New York Liberty in Uncasville, Conn.

The Sun (16-9) head into the early tipoff in fourth place in the league and trailing the third-place Seattle Storm by one game. They missed a chance at gaining ground in a 91-83 loss to the Aces.

“It is what it is,” Sun coach Curt Miller said. “It’s what everybody deals with in this league and no one’s going to feel sorry for each other. So, we’ve just got to weather this stretch and continue to push to try to peak at the right time and get in the best playoff position as we can.”

Without Jones, Brionna Jones moved into the starting lineup and finished with 16 points, six rebounds and four assists. DeWanna Bonner led the Sun with 19 points but they also allowed 33 points off 22 turnovers — with 12 of those coming in the second half.

New York (9-15) is on a three-game losing streak and has lost five of six. Unlike the first four losses in that stretch, the Liberty were non-competitive in an early tipoff Thursday when they were handed a 108-74 loss to the visiting Aces.

On Thursday, the Liberty allowed 71 points in the first half after giving up the game’s first 12 points and allowing Las Vegas to make its first 10 field goals.

“That was an absolutely (expletive) game, and I had to sit through it, unfortunately,” Liberty coach Sandy Brondello said. “Sometimes you feel helpless. You’re like, ‘I don’t know. Can we stop at halftime?'”

Natasha Howard led the Liberty with 19 points and nine rebounds, but the rest of the starters struggled, including Sabrina Ionescu. She was held to nine points on 1-of-8 shooting from the field.