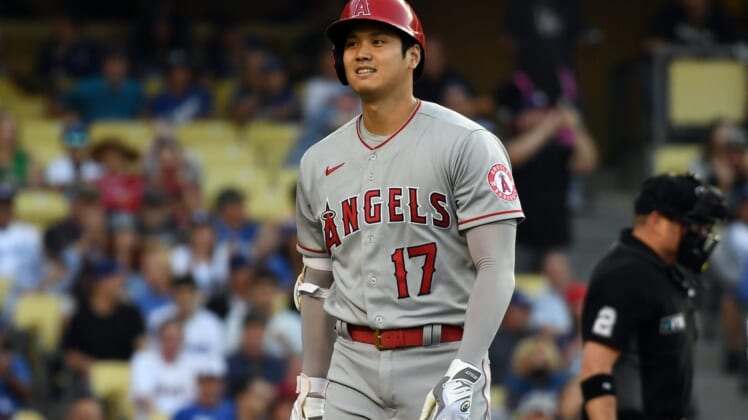 It’s hard to say whether the Los Angeles Angels or the Seattle Mariners are struggling more at the plate.

Perhaps the five-game series between the teams that starts Thursday night in Seattle will help answer that question.

The Mariners managed just five hits in a 5-0 loss to the visiting Minnesota Twins on Wednesday afternoon, the second time they were blanked in the past four games.

Wednesday night, the Angels were nearly no-hit by the Los Angeles Dodgers’ Tyler Anderson, with Shohei Ohtani breaking up the bid with a one-out triple in the ninth inning. The Angels finished with two hits in a 4-1 defeat.

For teams that showed promise early in the season, the Angels and Mariners are in danger of falling out of the playoff race by the All-Star break.

“I feel like almost every night that we’ve been right in the ballgame, and then it comes down to a matter of giving them enough support on the offensive side, and we haven’t been able to do that,” Mariners manager Scott Servais said. “You get into stretches like this throughout the course of the season. You’ve got to find ways to get through it. Typically, it’s doing the little things.”

Seattle left-hander Marco Gonzales delivered six scoreless innings against the Twins before allowing a pair of baserunners in the seventh. Servais came out to the mound, but Gonzales said he could get a ground ball, and the manager left him in.

Gonzales did just that, but the Mariners were unable to turn the inning-ending double play. Reliever Paul Sewald then allowed the hit that scored the game’s first run.

The Mariners threatened in the bottom of the inning, putting two on with no outs, but Dylan Moore popped up a sacrifice-bunt attempt, and they failed to capitalize.

“Last year, we were kind of the cardiac kids, winning games late, one-run games, and that might not just be us this year,” said Gonzales, referring to the team that stayed in contention until the season’s final weekend but was unable to snap a postseason drought that extends to 2001 — the longest in the four major professional sports.

With Mike Trout healthy and reigning American League MVP Ohtani starring both at the plate and on the mound, the Angels also hoped to contend this season.

However, they stumbled through a 14-game losing streak — and the team fired manager Joe Maddon after the first 12 defeats in that stretch. The Angels snapped that skid on June 9 but have gone 1-4 since and have scored just two runs total over their past three games.

“I love the effort and how we’re going about things,” Angels interim manager Phil Nevin said. “You just feel like you’re just one big knock (away).”

Ohtani (4-4, 3.64 ERA) is scheduled to start the series opener against Mariners rookie right-hander George Kirby (1-1, 3.65), who will face the Angels for the first time. Ohtani, who hit a two-run homer and allowed just one run in seven innings to help the Angels end their losing streak last week, is 2-0 with a 2.37 ERA in three career starts against Seattle.

Angels third baseman Anthony Rendon is considered day-to-day due to inflammation in his right wrist after leaving Tuesday’s game against the Dodgers.