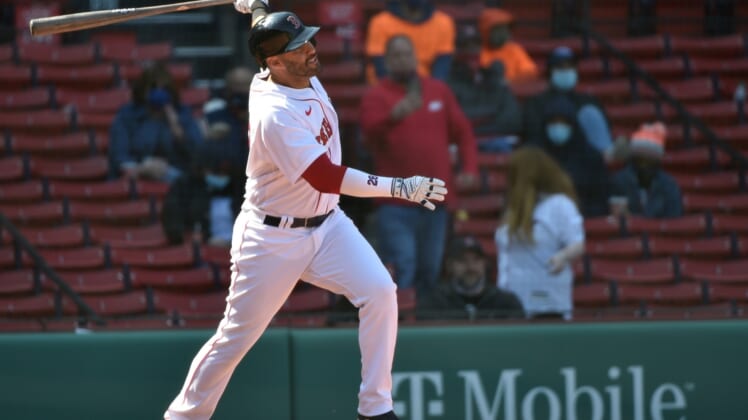 The Boston Red Sox are trying to get back on their feet after the Baltimore Orioles swept them in a season-opening series this weekend. That, though, might be a tough task as the defending American League champion Tampa Bay Rays come to town Monday.

The Rays took two of three from Miami in their season-opening series. They received a rare Sunday off — thanks to those who made the schedule — after the Marlins handed them a 12-7 loss on Saturday.

Still, even though the Rays didn’t pitch well Saturday, they were content going to Fenway Park having taken the Miami series.

“I hate that we took the (loss) and I took the (loss) personally,” said Chris Archer, who came on in relief for just the fourth time in his career. “I was responsible for it. But there’s a lot of good also, and we won the series. We’re heading to Boston with twice as many wins as losses, so there’s a lot to hang our hat on.”

Tampa Bay’s strong pitching is something the Red Sox will need to figure out after Boston managed only five runs in three games against Baltimore. The Rays have used their unique ways to develop pitchers and have had a good staff for the past few years.

But they will be without pitcher Ryan Sherriff, who was placed on the restricted list Saturday before the loss in Miami, after saying he wanted to step away from the game. Catcher Joseph Odom will take Sherriff’s roster spot, and the team isn’t sure when he will be back.

“We fully support Ryan, his thoughts,” Rays manager Kevin Cash said. “I think it’s just best to leave it at that.”

Michael Wacha gets the start for Tampa Bay in what will be his first appearance for the Rays. He was 1-4 with the Mets last year and has faced the Red Sox only once in his career (1-0, 1.80 ERA).

Nick Pivetta starts for the Red Sox. It will be the first time he will pitch against Tampa Bay.

Boston manager Alex Cora said this was not his team’s best three games, and they’ve got things to work on.

Cora spoke Saturday about the defensive struggles Rafael Devers had at third base through the first two games against the Orioles. Cora sat him on Sunday in favor of Marwin Gonzalez but said he still believes in Devers.

The Red Sox need to wake up on offense. J.D. Martinez was the lone bright spot Sunday, driving in two runs in the 11-3 loss to Baltimore.

The Red Sox hope that, if all goes well, pitcher Eduardo Rodriguez could return later this week. He is on the injured list with a tired arm.