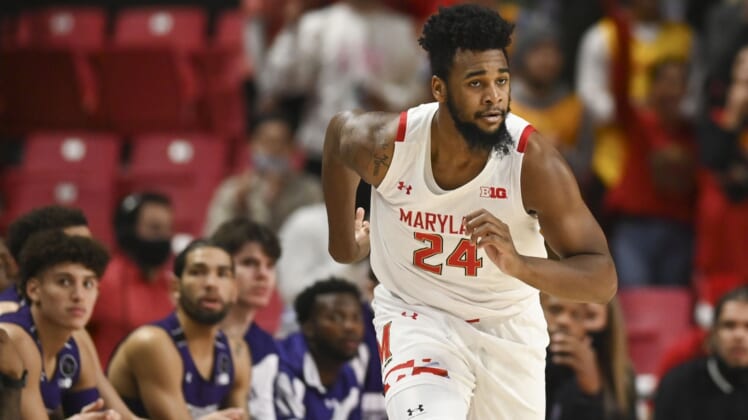 In the first game after the Christmas break, Maryland used a dominating second half to defeat Lehigh, 76-55, Tuesday night in College Park, Md.

Eric Ayala put up a game-high 20 points in the win, shooting 8-for-13 from the field and 3-for-6 from three. Ayala was one of five Maryland (7-4) players who scored in double-figures, including 17 points from Donta Scott and 12 points from Julian Reese, tying a career-high.

Unfortunately for the Terps, the biggest news in the win was the loss of point guard Fatts Russell, who sustained a knee injury with nine minutes left in the second half and didn’t return to the floor.

The Terps hadn’t played a game in two weeks and nearly had to wait several more days after COVID canceled its initial matchup against Loyola (MD). However, Lehigh was found as a replacement and played Maryland tough in the first half.

It was just a three-point game at halftime as the Mountain Hawks (1-10) shot 45.2 percent from the floor and had two players, Jeameril Wilson and Evan Taylor, in double figures in scoring at the half.

Maryland shot 42.1 percent in the game and outscored Lehigh 39-21 in the second half, holding the Mountain Hawks to 17.9 percent shooting in the half.

The Terps dominated from the free-throw line, shooting 23-for-26 and getting into the double bonus before the 10-minute mark in the second half. Maryland also won the battle of the boards, 47-27 and outscored Lehigh, 36-20, in the paint.