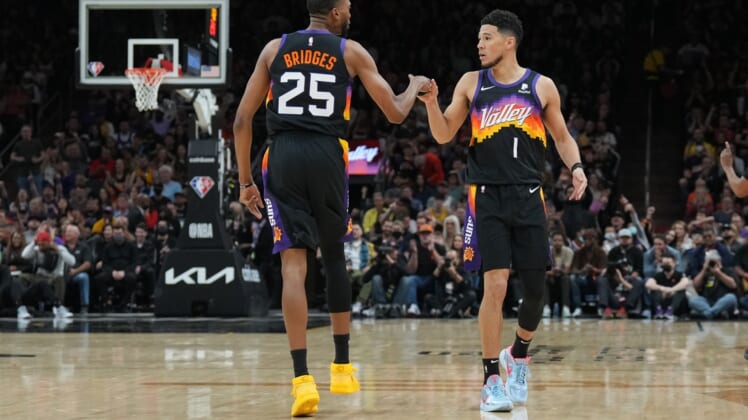 Devin Booker poured 12 of his team-high 30 points into a 48-point, first-quarter explosion Sunday night that sent the host Phoenix Suns to a 140-111 victory over the Los Angeles Lakers in a matchup of possible first-round playoff opponents.

Deandre Ayton also contributed 10 points to the first-quarter flurry that put the Lakers in a 26-point hole and paved the way to a seventh loss in their last nine games despite a game-high 31 points from LeBron James.

Ayton finished with 23 points for the Suns, who successfully rebounded from a 117-112 home loss to the Toronto Raptors on Friday.

In beating the Lakers for the third straight time this season by a total of 57 points, the Suns went from a 6-2 deficit to a 16-6 lead behind a pair of Booker 3-pointers.

He added a third three later in the period, turning it into a four-point play when fouled on a 30-footer by Stanley Johnson.

On a night when they shot 56.9 percent from the field, the Suns went on to lead by as many as 28 points in the second quarter and 35 in the fourth minute of the final period before both teams emptied the bench.

Booker’s 30-point game was his 21st of the season. He shot 4-for-10 on 3-pointers and also found time for 10 assists, completing his fourth double-double of the year.

Ayton made 11 of his 14 shots and also led all rebounders with 16 for his 22nd double-double.

Cameron Payne aided the cause with a game-high 11 assists to complement nine points.

James went for 31 points and team-highs in rebounds with seven and assists with six. The 30-point game was his 28th of the season.

Carmelo Anthony had 18 points, Russell Westbrook and Malik Monk 13 apiece, and Austin Reaves 10 for the Lakers, who lost despite outscoring the Suns 48-36 on 3-pointers.

James (five) and Anthony (four) combined for nine of the Lakers’ 16 3-pointers.

The 140 points allowed were one fewer than the Lakers’ season-high of 141 in a three-overtime loss to the Sacramento Kings in November.