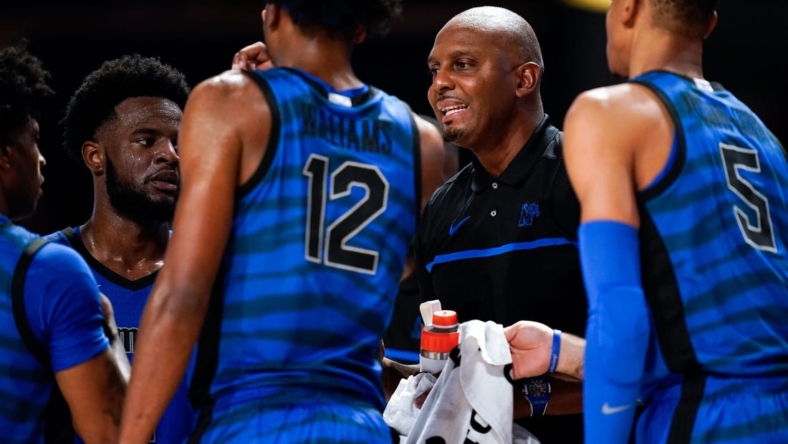 Memphis’ aggressive 2-3 zone held the Commodores to 41.1% shooting. The Tigers never trailed and led by as many as 19.

Guard Alex Lomax chipped in with 10 points, 10 rebounds and three steals for the Tigers (1-0). Davis, an SMU transfer and the reigning American Athletic Conference Player of the Year, added six assists and two steals in his Tiger debut.

Memphis took its second 17-point lead (and first of the second half) when Lomax drove the right side and converted a layup with 15:38 left.

The Tigers extended the lead to 49-30 on guard Elijah McCadden’s corner 3 with 14:35 remaining.

Vandy answered with a pair of Lawrence free throws and then Memphis’s Williams responded with a 3 with 4:21 left to make the lead 16.

The Commodores didn’t get within single digits again until forward Liam Robbins’s 3 with 39 seconds left.

Memphis, between its full-court pressing and an aggressive half-court zone, forced Vandy into a slow offensive tempo and allowed it few open looks.

The Commodores were 2-for-17 to start the evening from the field and trailed 19-6 after Memphis’s Kao Akobundu-Ehiogu’s put-back dunk with 9:26 left the first half.

The Tigers extended the lead to 28-11when Williams rammed home a fast-break dunk with 5:30 left in the half.

Vanderbilt forward Emmanuel Ansong, playing his first game for the Commodores, took a hard fall with 5:37 left in the game. He remained on the floor for several minutes as trainers looked at his head and didn’t return.