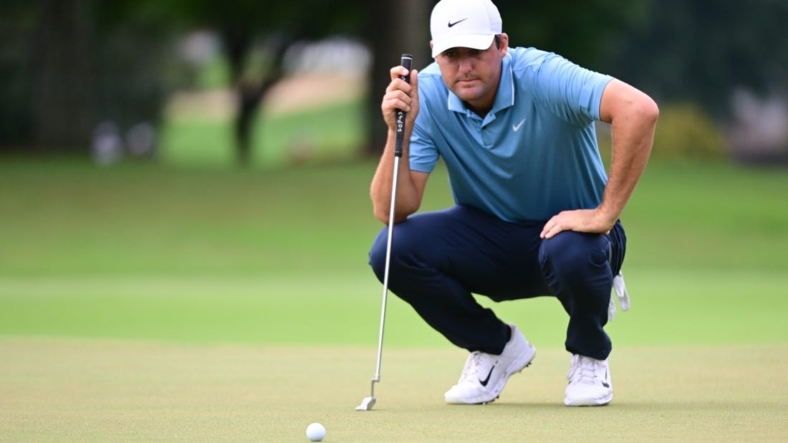 Everyone is still looking up at Scottie Scheffler after one round of the Tour Championship.

The world No. 1 began the final leg of the FedEx Cup Playoffs with a two-shot lead at 10 under par, and his 5-under 65 upped the advantage to five on Thursday at East Lake Golf Club in Atlanta.

Scheffler’s closest competition is Xander Schauffele, who started the tournament in third and moved to 10 under with a 4-under 66. Matt Fitzpatrick of England and Joaquin Niemann of Chile tied for the round of the day, 64, to move to third and fourth at 9 under and 8 under, respectively. Patrick Cantlay (70) tied Niemann for fourth at the end of the round.

Per the FedEx Cup scoring format, Scheffler started with a two-stroke advantage over Cantlay after the pair finished Nos. 1 and 2 in FedEx Cup points. Scheffler birdied the par-4 third hole and eagled the easy par-5 sixth by reaching the green in two and making a 16 1/2-foot putt.

When the eagle putt dropped, Scheffler took a five-stroke lead at 13 under, and it became a six-shot cushion when Schauffele took a step back with his only bogey of the day at the par-3 ninth.

But Scheffler also made his only bogey at No. 9 and Schauffele came back with birdies at Nos. 10 and 12. His approach at No. 10 landed inside 5 feet.

Scheffler birdied the last three holes to regain his cushion. He drained putts of 14 and 11 feet at the par-4 16th and 17th before a two-putt birdie at the par-5 18th hole.

“I felt like I played really good all day, and I was only 2 under, so to get those last three birdies at the end was definitely some icing on the cake,” Scheffler said.

After starting in second at 8 under, Cantlay struggled all afternoon and headed to the last hole 2 over. But the defending champion reached the green in two and made a 22-foot eagle putt to get back to where he started.

Fitzpatrick and Niemann also eagled the finishing hole by reaching the green in two.

Fitzpatrick, the U.S. Open champion, also flirted with an ace at the par-3 15th as his tee shot got a favorable bounce in the direction of the cup. It barely slipped past the hole but set him up for a 3-foot birdie tap. He was one of just four players to finish bogey-free.

“Bogey-free rounds are pretty much my favorite,” Fitzpatrick said. “I was out of position a few times. Managed to get myself back into position and get up and down well today, which was nice.”

The field of 29 golfers played through rainy conditions early on as grounds staff had to “squeegee” excess rainwater off some fairways. Isolated thunderstorms are in the forecast for Atlanta for each of the next three days as well.

Tied for sixth at 7 under were Sungjae Im of South Korea, Cameron Smith of Australia and Rory McIlroy of Northern Ireland, who all began at 4 under and shot rounds of 67.

Nobody had a wilder day than McIlroy, though. He hit his opening tee shot out of bounds and wound up with a triple bogey at No. 1. He was 4 over through four before playing the final 14 holes in 7 under, featuring an eagle 3 at No. 6. His final tally also had eight birdies, four bogeys and just four pars.

“I got off to the worst start possible,” McIlroy said. “We got a little unfortunate that we teed off in that big downpour earlier in the day. I tried to guide sort of this little peeler into the fairway at the first and complete double-crossed, body stopped.

“I knew my game was good, it was just one of those things. But not the ideal way to start, but proud of how I bounced back from that.”