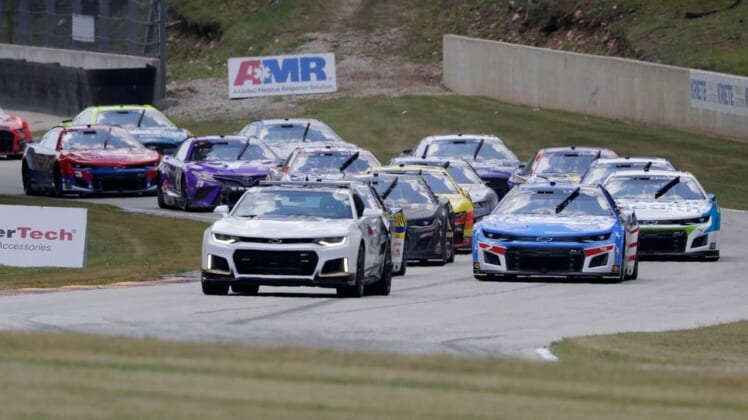 Steven Wilson moved to the top of the eNASCAR Coca-Cola iRacing Series standings with a victory on Tuesday at a virtual Road America in Elkhart Lake, Wis.

It was Wilson’s second career eNASCAR Coca-Cola iRacing Series victory, adding to his triumph on March 15 at a virtual Atlanta Motor Speedway. Wilson joins Michael Conti and Nick Ottinger as two-time winners on the circuit this year.

Wilson continued his run of placing fifth or better in each of his career eNASCAR road-course events.

“Honestly I feel like the difference today was just qualifying on pole,” the Cedar Rapids, Iowa, resident said. “I didn’t do too many race runs. The longest run I did the whole week was like 10 or 12 laps, so I was prepping a lot for (qualifying) and that paid off even though I didn’t hit my lap right, but we still hit it good enough for pole (position).

“The clean air was enough for us to hold on, and I had a good enough pace to hold Mitchell back by about a second there at the end.”

Asked about the big picture of the season, Wilson said, “We’re winning a championship. That’s what we’re here for. We’ve been strong in every race this year, and obviously it’s just been a crazy run.”

DeJong, from Temecula, Calif., said, “It was quite a special race for sure. The whole field, we were so close the whole time. It was really exciting. …

“Steven did a fantastic job. Perfectly managed the race. He had that gap right from lap one and just managed it perfectly.”

Casey Kirwan drove the No. 95 Chevrolet to third place. Graham Bowlin came in fourth in the No. 48 Toyota, and Bobby Zalenski placed fifth in the No. 18 Toyota.

The next eNASCAR Coca-Cola iRacing Series race is scheduled for July 19 at a virtual Pocono Raceway in Long Pond, Pa.