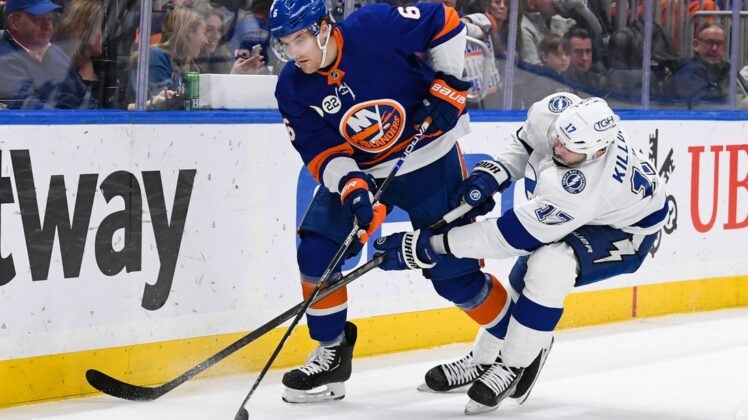 Captain Steven Stamkos recorded a hat trick to notch his franchise-best ninth straight multi-point performance to fuel the visiting Tampa Bay Lightning to a 6-4 victory over the New York Islanders on Friday in Elmont, N.Y.

Tampa Bay (51-23-8, 110 points) officially clinched third place in the Atlantic Division after the Boston Bruins (51-26-5, 107 points) dropped a 5-2 decision to the Toronto Maple Leafs earlier on Friday. The Lightning will square off against the second-place Maple Leafs in an Eastern Conference first-round playoff series.

Stamkos scored in the first period to reach the 40-goal mark for the sixth time in his career. He then beat Ilya Sorokin (28 saves) with a wrist shot from the slot to give Tampa Bay a 4-3 lead with 8:47 remaining in the third period. He completed his 10th career hat trick with 2:10 to play.

Stamkos snapped a tie with Vincent Lecavalier for the club record in consecutive multi-point performances. Stamkos has 10 goals and 16 assists during his streak.

Nikita Kucherov increased his point streak to nine games with a pair of assists, but he saw his franchise high-tying eight-game goal-scoring streak come to a halt.

Defenseman Ryan McDonagh, Corey Perry and Brandon Hagel also scored and Andrei Vasilevskiy made 33 saves to send the Lightning to their fifth win in their last six games.

Bailey’s power-play goal gave New York a 3-1 lead with 1:12 remaining in the second period before Tampa Bay countered in the third. Perry beat Sorokin on the glove side at 1:21 and McDonagh converted from in close to forge a tie at 10:10.

Stamkos tallied twice before Hagel sealed the win by scoring into the empty net.

New York opened the scoring just 32 seconds into the contest as defenseman Noah Dobson’s shot from above the right circle was redirected home by Pageau.

Stamkos forged a tie before Bellows gave New York a 2-1 lead after a fortunate bounce at 9:35 of the second period. The son of former Lightning forward Brian Bellows fended off McDonagh and wristed a shot that caromed off the left skate of Tampa Bay defenseman Cal Foote and into the net.