Steven Alker jumps into lead after 2nd round of ClubCorp Classic 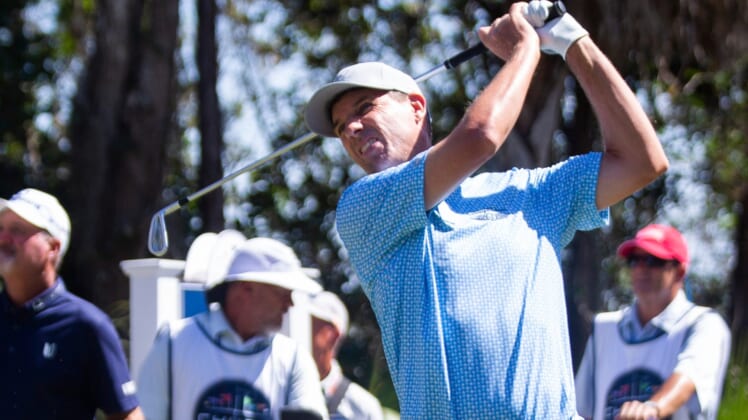 New Zealand’s Steven Alker recorded a birdie and an eagle within his first three holes Saturday and went on to shoot a 5-under-par 66 to take over the lead after the windy second round of the ClubCorp Classic on Friday in Irving, Texas.

Alker, who is looking for his third Champions Tour win, also birdied two of his final three holes to end the day at 8-under 134 at Las Colinas Country Club.

“I struggled in the middle a little bit today, but my short game held me in there. Made some nice putts, good par saves. I said to my caddie after 9 and 10 we’ve got to get going, we’ve got to get back on track here. So I actually started from 12 on I played really nice. … . So I was pleased to finish that way and have a 4 on the back nine. Dinner’s going to taste a little bit better tonight,” Alker said.

Tied for second at 6-under are first-round leader Jerry Kelly and Lee Janzen, who began the day tied with Alker and two others in a tie for fifth.

Kelly, who nailed an ace in the first round, managed a 1-under 70 on Saturday, surviving a round that included three bogeys.

Janzen, who played the back nine first, birdied three of his first six holes on his way to a 3-under 68. He was hindered by bogeys on two of his final six holes.

“Well, we’ve seen the wind all week and it’s a challenge. … I sometimes get ahead of myself, but last two days I’m happy with the fact that I stayed in the moment one shot at a time. I definitely left — made some mistakes on my last nine holes with my putter, but overall I putted really well for two days, so I think I can get over that. And I’m in good position after two days,” Janzen said.

Woody Austin and Scott Parel, who opened the tourney with 4-under 67s, each fired 70s on Saturday. They are among six golfers tied for fourth at 5-under. Gene Sauers, who was tied with them to begin the day, shot a 1-over 72 to fall into a tie for 13th.