Steve Stricker in three-way tie for lead at Insperity Invitational 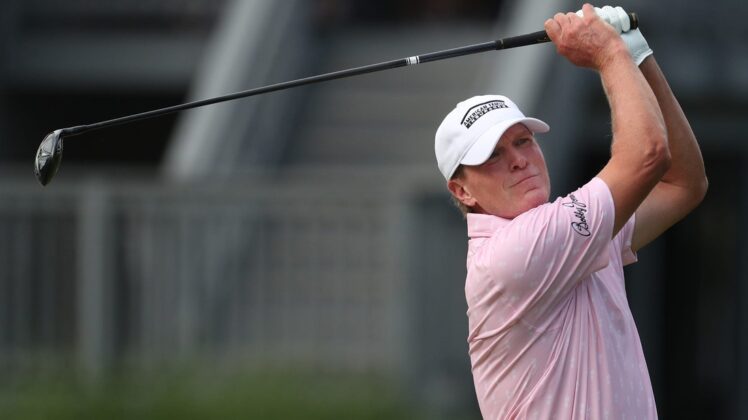 Steve Stricker, Ernie Els of South Africa and Steven Alker of New Zealand each shot 5-under-par 67 to form a three-way tie for the lead at the first round of the Insperity Invitational Friday at The Woodlands (Texas) Country Club.

All three co-leaders collected six birdies and one bogey on the day. They lead eight players who are tied for fourth a stroke behind at 4-under 68, a group that includes Schwab Cup money leader Miguel Angel Jimenez of Spain.

Stricker competed for the first time since a viral illness hospitalized him over the winter and caused him to lose 25 pounds. He credited his scrambling for his low round.

“Usually I don’t go to tournaments if I’m not ready,” Stricker said. “I came here not really being that ready and it showed at times, but I also come here with a lot of expectations into playing well. And I’ve been putting up some decent scores in Orlando (his winter home) when I do play, but my mindset is still to come here and compete.”

Els carded four birdies on the front nine and added two more at the back nine’s two par-5 holes, the 13th and 15th. He held the solo lead at 6 under until the par-4 18th hole, when a bogey set him back.

“I made some putts and, you know, that’s been the difference,” said Els, a four-time major winner. “Get the ball in the hole, you get momentum, you can get a score on the board, so got to keep it up.”

Alker, who split his six birdies evenly between the front and back nine, pointed out that the wind picked up and played a factor during the afternoon.

“It got gusty kind of around the front for a couple holes and then around the back. I hit a couple of iron shots, was like whoa. Especially coming in with the water holes, the carry on 17, you just didn’t know what the wind’s doing. So just a little bit of a guessing game, but I just tried to play a little long, just take half a club extra and it worked out nice.”

Defending champion Mike Weir of Canada opened with a 1-under 71.