And I’m not talking about on vacation.

The Carolina Panthers are trying to trade the wide receiver. What better team to do the trade with than the Baltimore Ravens? The Ravens traded Anquan Boldin practically moments after winning the Super Bowl in 2012, and didn’t exactly have a successful season in 2013.

34 year-old Smith had a little bit of a shaky season last year, but having a veteran WR on that squad could be just what the offense needs. The partnership between him and Joe Flacco would be too cute for even a Hallmark movie. 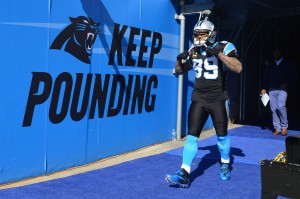 Smith finished the season in 2013 with 49.7 yards per game, four touchdowns (second fewest of his career). If Smitty gets in more than just “strong potential landing spot” talk, then him and Torrey Smith could be lethal for teams in the AFC North.