Washington Nationals pitcher Stephen Strasburg ‘not really sure’ about his future 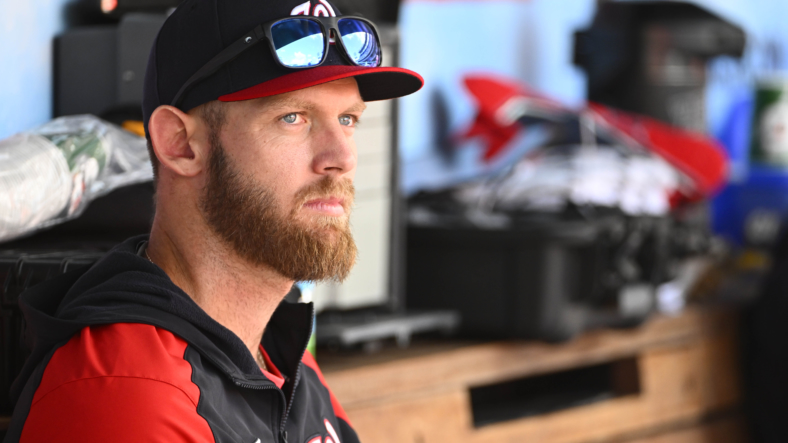 Washington Nationals starting pitcher Stephen Strasburg helped carry the franchise to a World Series title in 2019, covering 36.1 innings in the MLB playoffs and later winning World Series MVP. Just a few years later, he could be approaching the end of his MLB career.

The Nationals rewarded Strasburgh for his postseason heroics. Washington signed him to a seven-year, $245 million contract in December 2019 that made Strasburg one of the highest-paid MLB players ever. Everyone in the organization hoped he would continue to be a workhorse in the rotation, but everything quickly unraveled.

Strasburg has pitched in just eight games over the next three seasons, covering 31.1 innings with a 6.89 ERA and 1.56 WHIP. A nerve issue in his pitching hand sidelined him for a majority of the 2020 season, followed by shoulder issues in 2021 that later required surgery in his shoulder to treat Thoracic Outlet Syndrome.

The Nationals and Strasburg hoped the 2022 season would be different. However, just five days after coming off the injured list on June 9, a stress reaction in his ribs forced Washington’s ace back to the IL and he won’t be returning this season.

In an in-depth feature by Jesse Doughtery of The Washington Post, Strasburgh detailed his injury setbacks and admitted that his career is approaching its conclusion.

As the story describes, TOS surgery required the removal of a rib and two muscles in his neck. Unfortunately, that has only made repeating his throwing mechanics even more challenging and it played a role in his latest injury.

Strasburg couldn’t throw a change-up without experiencing trouble with his shoulder in that lone June appearance. Months later, Strasburg is still not even at the stage where he feels comfortable throwing without doing further damage to his shoulder. It only adds further uncertainty to the remainder of his career.

“I’ve been doing very minimal exercises, and I’ve seen some improvements as far as the way my shoulder is sitting. But I feel like the strength is not quite there, and I’m not really sure what the future holds.”

Stephen Strasburg on where he is at in his recovery, how much longer he’ll play baseball

Strasburg is making every effort to return to baseball, as Dougherty’s story perfectly captures. However, the lengthy process and recurring issues suggest years of being the workhorse in high school then at San Diego State followed by his run with the Nationals have all taken their toll.

Already 35, Strasburgh will likely soon be forced to make a decision. If he can’t ever return to being a starting pitcher and operating with his full repertoire without causing more long-term damage to his body, it will likely be time to walk away.