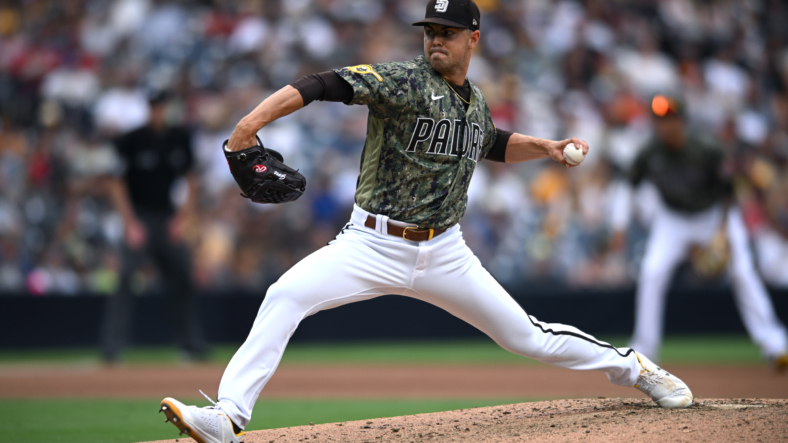 The Washington Nationals made the decision to trade their superstar slugger Juan Soto to the San Diego Padres at the MLB trade deadline back on August 2. Now, just over a month later, one of the largest pieces of the trade package, Mackenzie Gore, is getting closer to making his debut with his new team.

Gore, a 23-year-old left-handed pitcher, had been dominant through nine of his first 13 starts with the Padres before experiencing elbow inflammation and even moving to the bullpen for a short time to try and manage the soreness. He was eventually shut down after his July 25 outing when he landed on the 15-day injured list as the team attempted to diagnose his ailment. Clearly, the issue has taken longer than 15 days to recover from, but optimism now fills the air for Gore.

While Gore may be in an entirely new atmosphere now in D.C., he’s been rehabbing this whole time and appears on track to return to the mound before the season is done.

Gore has thrown off a mound three times as he continues to test his elbow, building back stamina. His most recent session came on Friday, and now he’s expected to face live hitters in a simulated game next week against his fellow Nationals teammates. The third overall selection from 2017 is aiming to throw 50 pitches in what will be the first time he’s faced live hitters since July 25.

Mackenzie Gore eager to get back on the mound

Already injured at the time of the trade, the Nationals knew it would be a few weeks before Gore could debut with his new team. But manager Davey Martinez isn’t sweating the process, as he knows the potential the pitcher offers is exciting.

The Nationals also have top pitching prospect Cade Cavalli on the 15-day IL after he ran into shoulder inflammation. He’ll be shut down for at least the next two weeks. It’s possible we don’t see another start from Cavalli this season, but at least Gore seems to be on his way.

Through 238.1 innings at the minor league levels, Gore averaged 11.7 strikeouts per nine innings. He has four plus pitches, including a fastball that averages 94.7 mph.

Gore was ranked as the third-best prospect in the MLB top-100 list in 2020, so you can imagine just how excited the Nats are to see what he can do once he’s back to 100%.