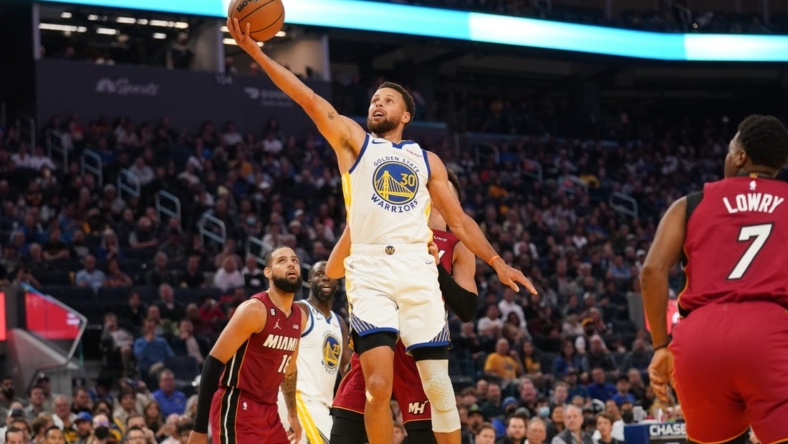 Stephen Curry saved 10 of his game-high 33 points for the final 5:32 of the game Thursday night, propelling the Golden State Warriors to a 123-110 victory over the Miami Heat in San Francisco.

In the first of two duels in a six-day stretch between last season’s NBA titlists and Eastern Conference regular-season champs, Golden State’s Andrew Wiggins had 18 points and 10 rebounds, the latter heading a dominant boards effort by the hosts.

Jimmy Butler had 27 points and Bam Adebayo 26 for the Heat, who were playing the second night of a back-to-back, having won 119-98 at Portland 24 hours earlier.

The Warriors led just 103-100 before Kevon Looney turned a Draymond Green assist into a dunk with 5:59 to go, setting the stage for Curry’s frantic finish.

The 2022 NBA Finals Most Valuable Player bombed in two 3-pointers and a pair of short jumpers in his critical 10-point flurry, which accounted for all but three of Golden State’s points while extending the lead to 118-107 with just 2:04 remaining.

Klay Thompson had the other three points in the run on a 3-pointer, then added another from long range with 1:34 to go to ice Golden State’s third win in its first five games.

Curry wound up 7-for-14 on 3-point attempts, helping the Warriors use produce a 54-42 scoring advantage from beyond the arc.

Thompson finished with 19 points for the Golden State. Jordan Poole added 11, and Green and James Wiseman had 10 apiece.

Looney grabbed eight rebounds, Green and Curry pulled down seven apiece and Wiseman had six for the Warriors, who outboarded the Heat 50-31.

Max Strus went for 14 points and Kyle Lowry produced 12 points and eight assists for Miami, which will get a shot at revenge when it hosts Golden State on Tuesday.