Stephen Curry responds to LeBron James, not interested in teaming up

The pairing of Stephen Curry and LeBron James is something most objective NBA fans would love to see before the two all-time greats retire.

Having just recently seen his Los Angeles Lakers eliminated from postseason contention, James’ future in Southern California remains firmly up in the air.

James added more fodder to that in a recent conversation on HBO’s “The Shop,” indicating that the player he’d most want to suit up with in the NBA is the aforementioned Stephen Curry.

LeBron James on teaming up with Stephen Curry

Despite his Lakers struggles this season, the 37-year-old James has put up a stellar performance.

With that said, there’s some questions about his future with the Lakers. James has said recently that he wants to play with his son, Bronny, in the NBA. He’s also set to become a free agent following the 2023-24 season. With a perceived rift between James and the Lakers’ organization, he could depart sooner rather than later.

So, will James be able to team up with Curry in San Francisco? Not so fast. A three-time champion, Curry responded to James on Wednesday. What he had to say was rather interesting.

“Well, he’s got his wish. When he’s the captain he’s picked me the last two All-Star games. I don’t know if that suffices, but I’m good right now.”

Stephen Curry on teaming up with LeBron James, via 95.7 The Game

Well, this took a turn. Locked in on a new four-year, $215.4 million extension he signed with the Golden State Warriors last summer, Curry will likely finish his career in Northern California.

Why doesn’t Stephen Curry want to team up with LeBron James?

It’s a real question. Even at their advanced ages, a James-Curry pairing would be scary times around the NBA. Both continue to play at MVP levels at this stages in their careers.

For Curry, it’s probably more about not wanting the circus to follow James to San Francisco. Despite winning two championships in three seasons with Kevin Durant, that era of Warriors basketball was defined by drama.

It could also be about roster construction. The Warriors’ dynastic run was headlined more by homegrown talent such as Curry, Klay Thompson and Draymond Green. Bringing in James would likely result in this trio seeing its time come to an end.

On that same note, the Warriors wouldn’t be able to sign James outright unless he was willing to come on the cheap. 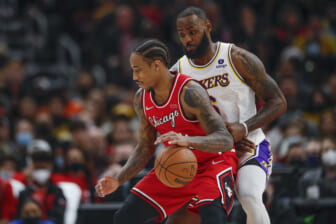 This would likely require Golden State working out a sign-and-trade that would realistically include young stars such as Jonathan Kuminga and Jordan Poole heading to the Lakers. It’s not something the Warriors’ brass would be keen about doing with their eyes fixated on the future.

Either way, it’s an interesting thought. The fact that Curry has no interest in teaming up with LeBron James could tell us what we need to know about how King James’ reputation has taken a hit among star players in recent years.

It wasn’t too long ago that stars were lining up to team up with the four-time champion. This doesn’t seem to be the case anymore.