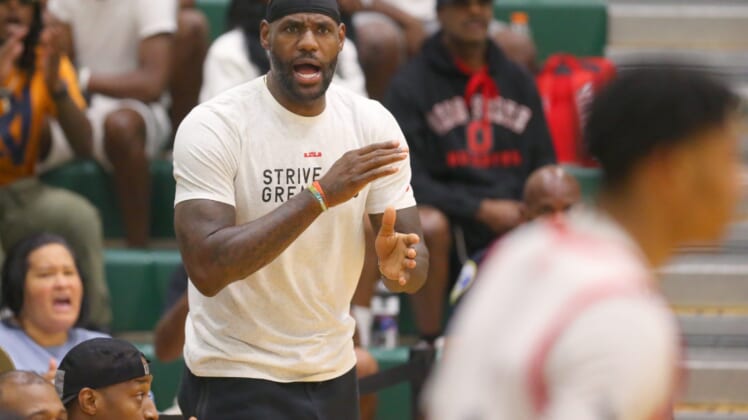 Los Angeles Lakers star LeBron James talked for years about his overwhelming desire to play in the NBA with his son. As Bronny James draws closer to reaching the highest level, LeBron sent a message to NBA teams at All-Star Weekend.

Already one of the greatest NBA players ever, LeBron has nothing left to prove. He’s closing in on the all-time scoring record and wants to win another NBA championship, but his legacy is already set. So, the 37-year-old is thinking about the final years of his career and fulfilling his goal of playing with Bronny.

In an in-depth interview with The Athletic’s Jason Lloyd, LeBron made it clear he will be ready to sign with whatever NBA team drafts his son.

“Wherever Bronny is at, that’s where I’ll be. I would do whatever it takes to play with my son for one year. It’s not about the money at that point.”

LeBron James on his desire to be teammates with his son Bronny James, via The Athletic

Bronny James, a junior at Sierra Canyon High School, is rated as the 52nd best recruit in 247 Sports 2023 recruiting rankings.  If the NBA draft allows players to declare right out of high school, there’s a possibility Bronny is eligible to be drafted in 2023. However, draft-eligibility rules are likely going to remain in place. As a result, Bronny James is eligible for the 2024 NBA Draft.

James is under contract with the Lakers next season for $44.474 million. After that, he is eligible for free agency in the summer of 2023. He’ll be playing in his age-39 season and will sign a one-year contract, allowing him to test the open market again in 2024.

Based on early evaluations, Bronny can develop into an NBA-caliber talent who might be worth a first-round pick. Even if LeBron is 40 by that time, there’s little doubt he’ll still be playing at a starting-caliber level. Because of his on-court impact and the revenue he’ll generate for a team, it could push Bronny higher up the draft board. Only time will tell what team LeBron and Bronny are playing for in 2024.