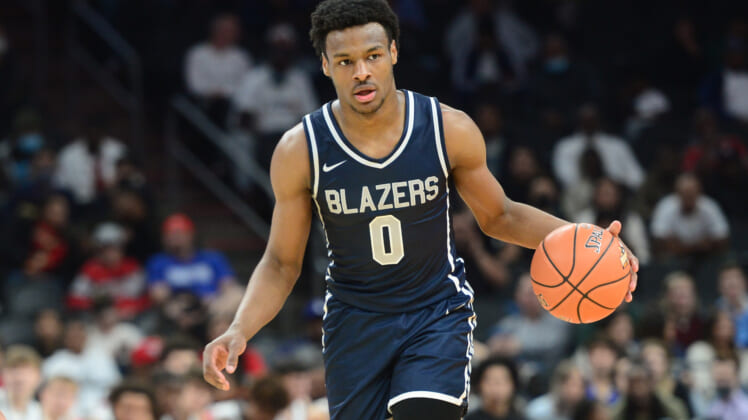 Bronny James, the son of Los Angeles Lakers star LeBron James, is looking to create his own legacy on the basketball court. A star guard at Sierra Canyon High School in Los Angeles, California, is reportedly already thinking about recruiting destinations as the next step in his future.

Bronny, the No. 38 recruit in 247 Sports’ 2023 recruiting rankings, is already attracting attention from college coaches and scouts across the country.

While he is months away from official visits and becoming one of the most scrutinized recruits in the country, there are reportedly four schools emerging as potential frontrunners to land Bronny James.

247 Sports’ Eric Bossi attended the 2021 Hoophall West showcase, where LeBron’s son was showcasing his talents. With his father in attendance, the 6-foot-3 guard made a strong impression in a winning effort by contributing 11 points, five rebounds, three steals and two blocks. But Bossi also revealed schools that might be on Bronny’s radar.

“He’s still basically off limits to the media and hasn’t put out a school list, but some of the teams that he is believed to have interest in include Duke, Ohio State, Tennessee and Texas among others.”

Given his talent, basketball IQ and the resources at Sierra Canyon, Bronny will likely get better and he doesn’t turn 18 until October 2022. By then, there will likely be no shortage of college programs pursuing him with scholarship offers.

Will LeBron play in the NBA with Bronny James?

LeBron has expressed a desire for years to be teammates with his son in the NBA. While there are second-generation NBA players, never in league history have a father and son played in the NBA at the same time.

Bronny is eligible for the 2024 NBA Draft, but the earliest projections vary on where he could be selected. LeBron’s desire to be teammates with his son could certainly play a role.

LeBron is a free agent after the 2022-’23 season and could sign a one-year contract, allowing him to hit the open market in the same offseason his son is a draft-eligible prospect. If that happens, LeBron can make NBA history.