Steelers star does not want to see Antonio Brown traded 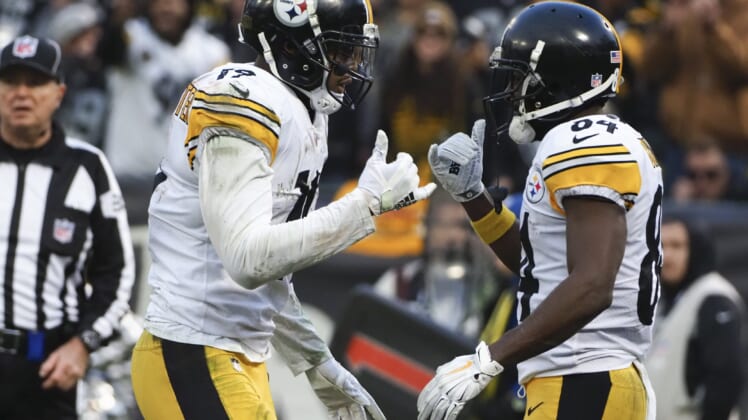 A lot has been made about Pittsburgh Steelers wide receiver Antonio Brown and his actions late in the regular season.

Brown was benched for the team’s Week 17 game after being a no-show leading up to the outing against Cincinnati. Reports then surfaced that a rift grew between him and teammates — captain Ben Roethlisberger included.

Things have since spiraled out of control. Pittsburgh’s brass has indicated that it will likely trade Brown before training camp. Meanwhile, Brown himself is reportedly looking to join the San Francisco 49ers.

In talking about his current teammate, Steelers star receiver JuJu Smith-Schuster indicated recently that he does not want Brown to be traded. More than that, the youngster seemed to go to bat for his fellow pass catcher.

“No, I don’t want AB traded,” Smith-Schuster said, via Chris Pastrick of the Pittsburgh Tribune-Review. “He makes me better. He makes the team better. He’s awesome. He’s a great dude.

One can easily understand why the always talkative Smith-Schuster would not want Brown to be traded. Just a sophomore this past season, the former USC standout recorded 111 receptions for 1,426 yards.

Brown’s presence on the other side led to single coverage — helping Smith-Schuster put up these ridiculous numbers.

He knows that full well.

“For myself, I learn a lot from him — just playing with him,” the receiver said. “If I want to increase my game to be the best, I gotta compete against him. So, I do not want him traded.”

In the end, it’s not going to be up to Smith-Schuster or anyone on the Steelers’ roster. If things are not fixed behind the scenes, Brown will be playing in another city next season.

In turn, this youngster would then immediately become Big Ben’s favorite target in the passing game.