Stars bid to get back on track, visit Canadiens 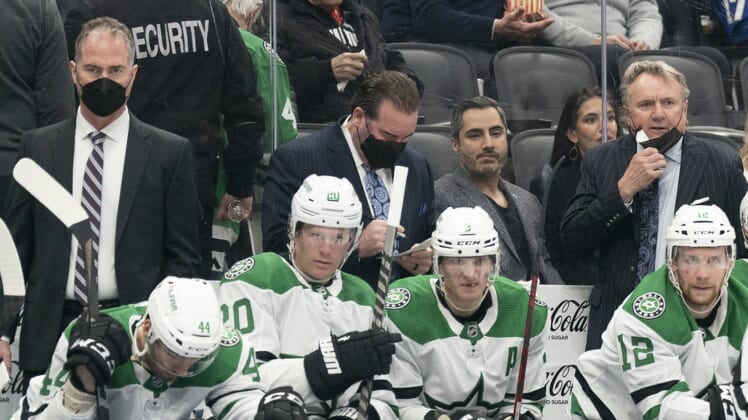 The Dallas Stars look to end a three-game losing streak and get back into the postseason picture on Thursday when they visit the Montreal Canadiens.

The three-game skid has dropped the Stars out of a Western Conference wild-card slot, and put the team even further behind in their quest for a top-three finish in the Central Division.

There haven’t been many positives to be found in the Stars’ last two defeats. The 7-4 loss to the New York Rangers on Saturday matched the Stars’ season high for goals allowed in a game, and Dallas couldn’t solve rookie goaltender Erik Kallgren in Tuesday’s 4-0 loss to the Toronto Maple Leafs.

The Stars registered 35 shots on net, the highest number in any of their four shutout losses this season.

“We wanted to put a lot of pucks on (Kallgren), get a lot of shots, try and make his night difficult,” Dallas captain Jamie Benn said. “I don’t know if we did that. We did have a lot of shots, but we have got to find a way to put a few of those in.”

The Stars have an 8-3-1 record in their last 12 road games. Dallas needs that kind of form to continue with eight of the team’s next 10 contests away from home.

The Canadiens collected a 5-3 win over the Stars on Jan. 18 in a game that marked Dominique Ducharme’s last victory as Montreal’s head coach. After Ducharme was fired on Feb. 9, interim coach Martin St. Louis has led the Canadiens to a respectable 8-6-1 record.

The Canadiens are still last in the NHL in points (40), and they opened a six-game homestand with a 6-3 loss to the Arizona Coyotes on Tuesday.

Montreal’s Cole Caufield scored twice within an eight-second span of the second period. The last NHL player to score two goals in such a short amount of time will also be on the ice Thursday — Stars forward Radek Faksa, who tallied twice in eight seconds on Nov. 28, 2017.

After a slow start to the season and a demotion to the American Hockey League, Caufield now has 19 points (10 goals, nine assists) over his last 15 games. The 21-year-old is seen as a future cornerstone for the rebuilding Canadiens, and even drew a flattering comparison to one of his coach’s most decorated teammates.

Caufield is “a little like (Tampa Bay Lightning captain Steven Stamkos) when he was young, his shot,” St. Louis said. “It’s a shot that hides his shooting angle a bit and it’s very accurate. I know (Stamkos is) bigger than Cole but in terms of his shot’s dynamics, it’s pretty close.”

Cayden Primeau took over in net during the first intermission and stopped 10 of 11 shots in the relief effort. The performance could be enough to earn Primeau the start on Thursday, as the Canadiens’ goaltending depth has been thinned by multiple injuries.

With Braden Holtby sidelined with a lower-body injury, Jake Oettinger has seen the bulk of recent work in the Stars’ net. Holtby took part in Tuesday’s morning skate and rookie backup Adam Scheel is an option, though Oettinger is the likely choice to start again.