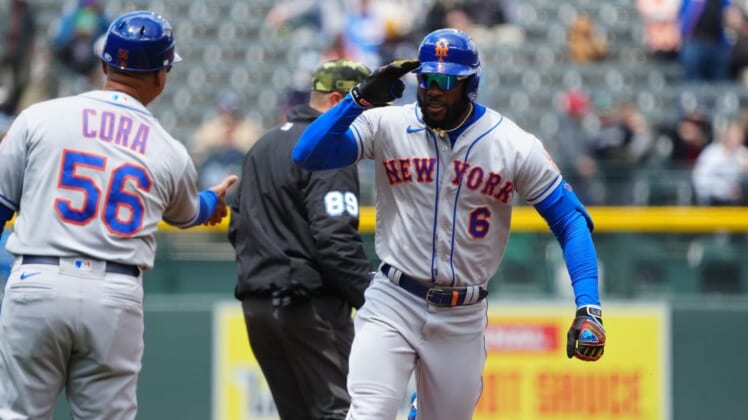 Starling Marte homered and singled, Luis Guillorme had three hits, and the New York Mets beat the Colorado Rockies 5-1 in Denver on Saturday in the first game of a split doubleheader.

Pete Alonso and Jeff McNeil had two hits each and Carlos Carrasco (4-1) allowed a run and struck out four in 5 1/3 innings for New York.

C.J. Cron had three hits for Colorado, which has dropped nine of its last 11 games.

Marte, who returned to the lineup after being on the bereavement list following the death of his grandmother, made his first at-bat memorable. He followed Brandon Nimmo’s single by homering on the first pitch he saw from German Marquez to give the Mets a 2-0 lead in the first inning.

It was his fourth homer of the season.

New York tacked on a couple of more runs in the second inning. Dominic Smith led off and reached on shortstop Jose Iglesias’ throwing error and Guillorme followed with a single.

Patrick Mazeika then doubled into the corner in right, driving in both runners and giving the Mets a 4-0 lead.

Marquez tossed three scoreless innings before New York got to him again. Guillorme led off with an infield single, Mazeika hit into a forceout and one out later Marte singled to right. Francisco Lindor followed with a single to right to drive in another run but was thrown out trying to stretch it into a double.

Marquez (1-4) allowed five runs — four earned — on 11 hits and struck out seven in six innings of work. He threw a season-high 102 pitches in his third straight start of six innings.

Colorado got a run back in the bottom of the inning. Cron led off with a double, Brendan Rodgers reached on a one-out infield single and Yonathan Daza’s fly out to right put runners on the corners.

Iglesias hit a squibbler in front of home plate and beat the throw to first, which allowed Cron to score.