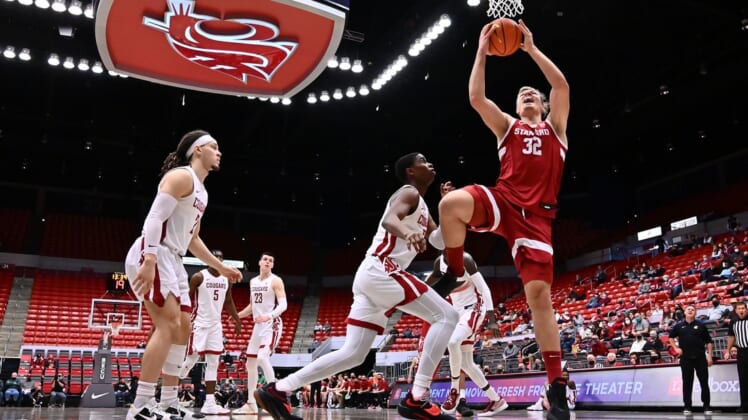 Brandon Angel and Spencer Jones each scored 16 points and Stanford used a 23-0 second-half run to rally from a double-digit deficit and defeat Washington State 62-57 Thursday afternoon in a Pacific-12 Conference game in Pullman, Wash.

Jaiden Delaire added 14 points for the Cardinal (10-4, 3-1 Pac-12), who posted their fourth consecutive victory. It was Stanford’s first win in four road games this season.

The start of the game was delayed 75 minutes as the teams awaited COVID-19 test results.

Stanford, coming off a 75-69 victory against No. 5 Southern California on Tuesday, missed its first three shots and committed four turnovers in the opening 4:56 while falling behind 7-0.

The Cougars led by as many as 12 points in the first half before settling for a 35-26 lead at the intermission.

Trailing 42-31 with 17:32 remaining, the Cardinal began their comeback.

Jones made a second-chance layup and James Keefe scored on a driving layup off a WSU turnover. Delaire added a 3-pointer after an offensive rebound and a Keefe dunk pulled Stanford within 42-40.

A dunk by Angel tied the score and he followed with a fastbreak layup off another turnover with 10:42 left to give Stanford its first lead. Angel capped a personal seven-point run with a 3-pointer to make it 47-42.

The Cougars finally snapped the 23-0 run on a free throw by Noah Williams with 5:27 remaining. WSU was held scoreless for 12:05, during which it missed 12 field-goal attempts and committed eight turnovers.

Williams, the Cougars’ second-leading scorer with 12.6 points per game, was limited to six on 2-for-9 shooting. WSU played without forwards Dishon Jackson and DJ Rodman for unspecified reasons.