Stampeders get another chance in rematch with Blue Bombers 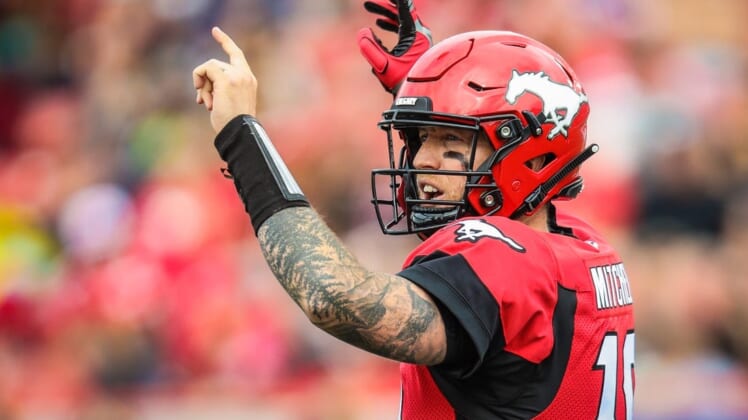 Following a 26-19 loss at Winnipeg two weeks ago, Calgary quarterback Bo Levi Mitchell talked about the opportunity facing the Stampeders.

“We’ve got to learn from it and move on,” he said. “But the beautiful thing about it is we get to see them again in two weeks.”

After an open date last weekend, Calgary’s chance for redemption arrives Saturday night when it plays host to the undefeated Blue Bombers in the CFL’s top game of Week 8.

The Stampeders (4-1) hope for a better performance from their veteran signal-caller. Mitchell became the latest in a long line of passers to experience trouble with the Winnipeg defense, hitting just 12 of 28 pass attempts for 187 yards with a touchdown and an interception.

Mitchell’s unusual poor game helped limit Calgary to 297 total yards and negated the impact of running back Ka’Deem Carey, who rolled up 110 yards on just 12 carries. Making Mitchell’s game even worse was the effort of Winnipeg quarterback Zach Collaros, who was 27 of 38 for 315 yards and two scores.

Greg Ellingson got open against every scheme the Stampeders tried, catching 11 passes for 152 yards, while Carlton Agudosi added six receptions for 70 yards and a pair of scores.

The two-time Grey Cup champion Blue Bombers (7-0) stayed unbeaten last week with a 24-10 victory in Edmonton. It wasn’t their prettiest effort, getting outgained 357-274, while Collaros tossed two interceptions while going just 7 of 16.

“It was a nice game for Dalton Schoen – he refuses to go down,” Winnipeg coach Mike O’Shea said. “He prepares diligently and he’s humble. He’s a very good player.”

Saturday’s game is the second of a three-game road trip for the Bombers, who can widen the gap on second-place Calgary with a victory.