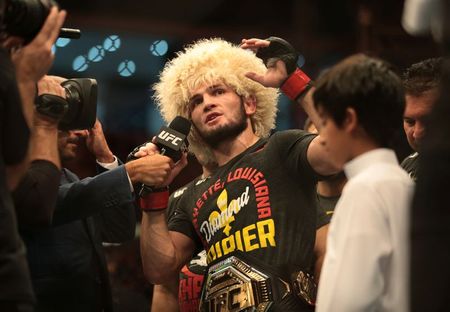 Saturday’s UFC 254 main event is the classic case of the irresistible force versus the immovable object.

Perhaps the most anticipated fight of 2020 will go down on Yas Island, Abu Dhabi, when undefeated UFC lightweight champion Khabib Nurmagomedov (28-0) of the Russian republic of Dagestan takes on interim titleholder Justin Gaethje (22-2) of Colorado in a title-unification, main-event bout.

Twenty-eight competitors have tried to stop Nurmagomedov, 32, and 28 have failed, including all 12 of his UFC foes.

Nurmagomedov’s recipe seems simple on paper: Anyone who can stop his takedowns has a chance. But no one’s been able to do that.

Steeped in the Russian grappling art of sambo, Nurmagomedov mauls opponents like an angry mama bear defending her cubs, scoring takedown after takedown and following up with a relentless striking game.

Gaethje, though, is a different type of cat. With a granite chin and a piranha-like ferocity on the attack, the 31-year-old Gaethje is a buzzsaw striker.

Early on in his UFC run, he seemed content to simply put on exciting fights, as he had two consensus Fight of the Year efforts in his first three UFC bouts, but went 1-2 in that span. Since then, he’s shown a new maturity in his game, learning to better pick his spots and displaying a gas tank which just wasn’t there in the past.

He’s won four straight fights, and done so in a manner that has fans wondering if he’s the man to end Nurmagomedov’s legendary run.

The title unifier came about after Nurmagomedov had to pull out of a scheduled UFC 249 date with Tony Ferguson at the start of the COVID-19 pandemic, as he went home to Russia then couldn’t leave due to travel restrictions. Ferguson instead accepted a bout with Gaethje for an interim belt, a fight the latter won via unanimous decision.

Gaethje has been openly contemptuous of the “interim champion” billing, shunning the belt and simply considering himself the No. 1 contender.