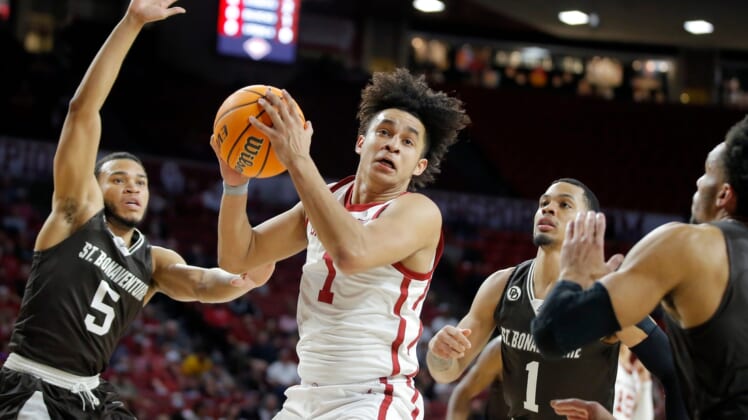 Jaren Holmes scored 23 points to lift St. Bonaventure to a 70-68 road win over Oklahoma in the second round of the NIT on Sunday in Norman, Okla.

The Bonnies will play Virginia in the third round, either Tuesday or Wednesday.

The game went down to the wire, with a missed free throw with less than 15 seconds remaining giving the Sooners a chance to tie or take the lead.

But Marvin Johnson’s jumper bounced off the front of the rim and Osun Osunniyi grabbed the rebound and flung the ball up the court to run out the clock.

Ossunniyi finished with 14 points and 10 rebounds for St. Bonaventure (22-9).

With less than two minutes left and the Bonnies leading by one, Umoja Gibson drove through the lane for a chance to give the Sooners the lead. But Gibson was called for an offensive foul, giving the ball back to the Bonnies and leading to a Kyle Lofton 3-pointer.

Lofton, who didn’t score until less than nine minutes remained in the game, registered 10 points down the stretch.

After trailing 36-33 at halftime, the Bonnies outscored the Sooners 21-10 in the first 10 minutes of the second half to take an eight-point lead.

Jalen Adaway, who was scoreless in the first half, scored 11 points during that 10-minute stretch.

Oklahoma had just three turnovers in the first half, leading to just two points on the other end. But the Bonnies scored 17 points off the Sooners’ 11 second-half turnovers.

The Sooners got off to a sluggish start offensively, missing seven of their first eight shots as the Bonnies jumped out to a 10-2 lead four minutes into the game.

But Gibson got hot, hitting four first-half 3-pointers to help Oklahoma take the lead by halftime. Gibson scored 16 of his points in the first half.

Holmes and Osunniyi combined for 25 of St. Bonaventure’s 33 first-half points.