Spurs can strengthen playoff position with sweep of Trail Blazers 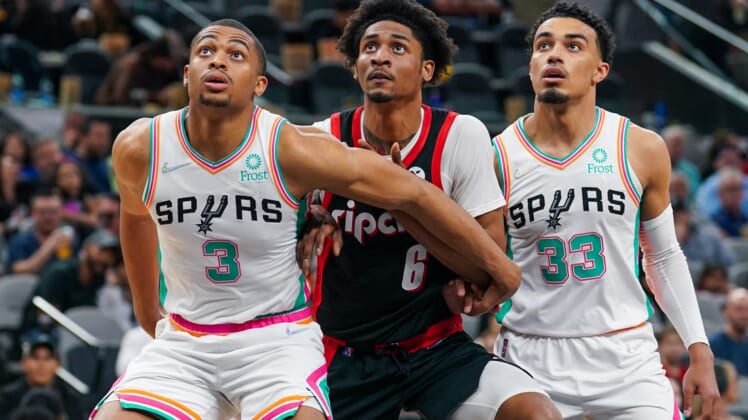 The San Antonio Spurs will have plenty to play for when they host the Portland Trail Blazers on Sunday in the latter contest of a two-game set between the teams in the Alamo City.

The Spurs routed Portland 130-111 on Friday to maintain their hold on the 10th position in the Western Conference and a spot in the play-in tournament. San Antonio (32-45) is one game in front of the Los Angeles Lakers for a final spot in the postseason and owns the tiebreaker over the Lakers via a better conference record.

The Spurs, who have five contests remaining, are two games in back of ninth-place New Orleans and could still pass the Pelicans, which would allow them to host a game in the play-in round.

Devin Vassell scored 22 points and Keldon Johnson added 21 to lead a balanced San Antonio attack in Friday’s win, which was the fifth in six games for the Spurs. San Antonio built a 25-point lead by halftime over short-handed Portland and cruised to the win.

“(Portland) was undermanned for sure, but you still take any win any way you get it,” San Antonio coach Gregg Popovich said afterward. “I thought we played well. It was a good mental test. I think mentally our guys were very focused under the circumstances and did a good job. We’ve got another one on Sunday, and we’ve got to do the same thing.”

Zach Collins poured in 15 points for San Antonio while Joshua Primo and Jakob Poeltl hit for 13 each, and Josh Richardson and Lonnie Walker IV added 12 points apiece in Friday’s win. The Spurs played without all-star point guard Dejounte Murray, who was out due to an upper respiratory illness.

“All the games right now are super-important, so we’ve got to lock in,” Collins said. “We had a good mindset coming out, and we had to make sure that we got this win. Even when we go up, it’s tough to hold a lead in this league, and we stayed with it.”

Portland (27-50) was eliminated from postseason consideration with the loss, which was its sixth straight defeat and its 16th in its past 18 outings.

“The second quarter — we were never able to absorb that,” Trail Blazers coach Chauncey Billups said. “San Antonio took advantage of us in the second quarter. They got whatever they wanted. But I thought we had a good second half.”

“It was a rough one tonight,” Johnson said. “Right now, we’re just trying to focus on our principles. Staying consistent with our principles, which is coming in each night, playing hard, giving our all and letting the results be the results.”

The Trail Blazers have five games remaining. If they win one game or less, they will finish with at best the sixth-worst record in the NBA and would all but be assured of a high draft pick.