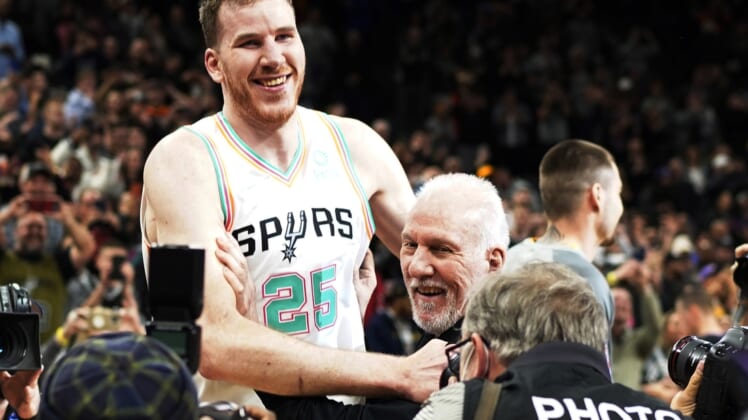 A milestone is out of the way for the San Antonio Spurs. Now they can turn their attention to making a run at the playoffs, beginning with a home game with the struggling Indiana Pacers on Saturday.

The game is the second half of a back-to-back set for the Spurs, who rallied to beat the Utah Jazz 104-102 on Friday. That result was the 1,336th regular-season win for San Antonio coach Gregg Popovich, lifting him past Don Nelson for the NBA’s all-time coaching record.

Popovich, in his 26th season, all with the Spurs, tied the record on Monday with a victory over the Los Angeles Lakers. Against the Jazz, the Spurs rallied from 15 points down in the fourth quarter to give Popovich the record. San Antonio had been 0-33 in games when trailed entering the final period.

“The record is there, but the win feels better actually than the record tonight, because Utah has a hell of a team,” Popovich said. “To win a game against a team like that is why we do this. Not for the record. We do it to have these kinds of wins. So, I’m thrilled about the win and really proud of the guys for the way they competed.”

San Antonio jumped into a tie for 11th place in the Western Conference, a game behind the New Orleans Pelicans for the final play-in spot.

The Pacers head to San Antonio on the heels of a 127-124 home loss to the Cleveland Cavaliers on Tuesday and a rare three days off. Tyrese Haliburton scored 25 points to lead Indiana while Duane Washington Jr., Jalen Smith and Goga Bitadze added 15 points apiece in the defeat. Eight of the nine Pacers who saw the court scored in double figures.

Chris Duarte was back in the Indiana lineup after missing the previous three games with a toe injury, and pitched in 11 points off the bench. Malcolm Brogdon racked up 12 points and 12 assists, but he will be sidelined for the foreseeable future after sustaining a concussion late in the game.

“He’s essentially in concussion protocol, but he’ll have to go through protocols to get cleared to play again, so he will not play this weekend,” Pacers coach Rick Carlisle said.

Indiana, which has dropped three straight, led Cleveland by eight heading to fourth quarter and by two with 40 seconds left but was undone in the end. The Cavaliers scored the game’s final five points.

“It was a hard-fought game and a disappointing loss,” Carlisle said. “Some of the things that happened down the stretch we’re just going to have learn from.”

Saturday’s game is the first of a road back-to-back for the Pacers, who will visit the Atlanta Hawks on Sunday.