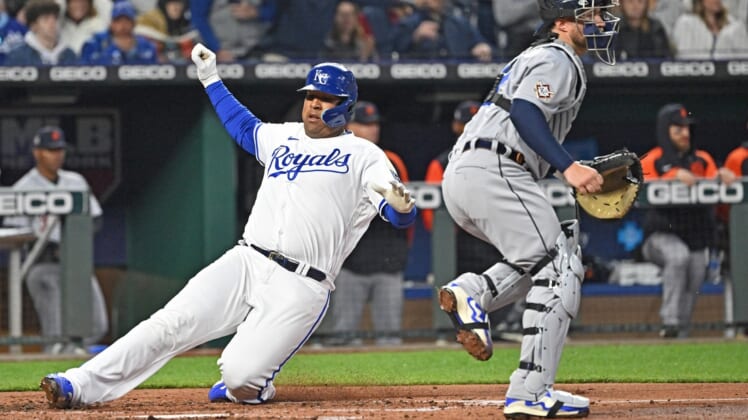 Spencer Torkelson hit a two-run home run to lift the Detroit Tigers to a 2-1 victory over the Kansas City Royals in the second game of a four-game series. The Royals have lost five straight games, and the Tigers have won two straight for the first time this season.

Sixteen of the last 21 games between the two teams have been decided by two runs or fewer.

Jacob Barnes (1-1) earned the win with 1 1/3 perfect innings. Michael Fulmer picked up his first save.

Brad Keller (0-1) took the hard-luck loss. He allowed two runs in seven innings, with just three hits and two walks. He had five strikeouts. One of those hits was Torkelson’s homer in the seventh inning. Torkelson had two of the Tigers’ three hits.

Detroit starter Tarik Skubal rebounded well from his first start. A game after allowing four earned runs in four innings, he gave up one unearned run in 5 2/3 innings. He allowed just four hits and no walks, while striking out seven Royals.

Keller pitched six shutout innings in his first start of the season, the Royals’ last win. He didn’t get a decision, but the Royals won 1-0 in 10 innings.

Both starting pitchers were on their games in the early innings. Keller allowed only a walk through four innings, with four strikeouts. Tarik Skubal struck out six in the first four innings and didn’t allow a baserunner until two outs in the fourth when Salvador Perez hit a single through the hole at short. Andrew Benintendi reached on an error and Carlos Santana’s RBI single scored Perez.

Keller gave up his first hit with two outs in the fifth, and then issued a walk. But he got Harold Castro to ground out to end the threat.

Keller continued to cruise until the seventh. He gave up an opposite-field double to Miguel Cabrera-giving him 2,995 hits in his career-and the 432-foot home run to Torkelson that gave the Tigers the lead.