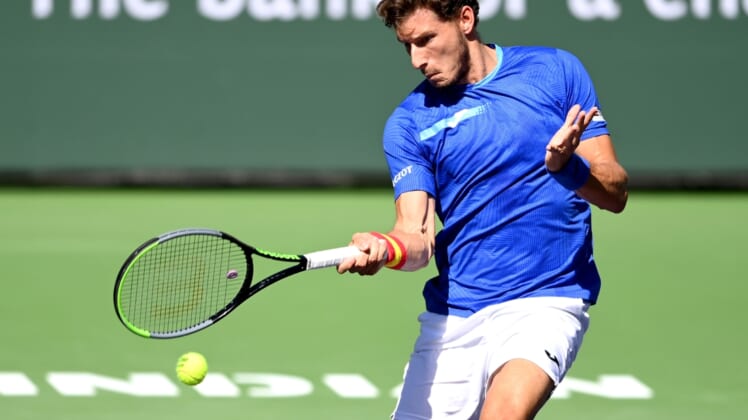 Spain and Poland swept through the competition Sunday on the second day of group play at the 2022 ATP Cup in Sydney.

The tournament will run through Jan. 9 and features 16 nations divided into four groups of four teams. The winners of each group will advance to the semifinals. Each matchup between countries in the group stage consists of two singles matches and a doubles match, with the country winning at least two of three earning what is termed a “tie” and counting as a win in the standings.

On Sunday, Spain and Poland each swept their ties.

For Spain (Group A), which squared off against Norway, Pablo Carreno Busta topped Viktor Durasovic 6-3, 6-3 in 69 minutes. Roberto Bautista Agut took care of Casper Ruud 6-4, 7-6 (4) as he won 92 percent of his first-serve points and didn’t face a break point. Spain’s doubles team of Alejandro Davidovich Fokina and Pedro Martinez capped the sweep with a 6-4, 6-1 win over Lukas Hellum Lilleengen and Andreja Petrovic.

Poland, meeting Georgia, took control of Group D. Kamil Majchrzak needed just 53 minutes to defeat Aleksandre Bakshi 6-1, 6-1. Powered by 16 aces, Hubert Hurkacz rebounded from a first-set loss to beat Aleksandre Metreveli 6-7 (5), 6-3, 6-1. The two singles victories were enough to give Poland a victory over Georgia even before the doubles match between Poland’s Szymon Walkow and Jan Zielinski against Bakshi and Zura Tkemaladze had started. The Polish pair won 6-7 (2), 6-2, 10-6.

Australia joined Russia atop Group B with its tie against Italy. Jannik Sinner put the Italians up in their first match, defeating Max Purcell 6-1, 6-3 in 64 minutes. But Alex De Minaur upset world No. 7 Matteo Berrettini 6-3, 7-6 (4) to put the countries all square and leave the final result up to the doubles tandem of John Peers and Luke Saville, who defeated Berrettini and Simone Bolelli 6-3, 7-5 to earn the tie for the Aussies.

And in Group C, the doubles team of Daniel Evans and Jamie Murray from Great Britain defeated Germany’s Alexander Zverev and Kevin Krawietz 6-3, 6-4 to give the tie to the Brits. The nations split in singles play, with Zverev defeating Cameron Norrie 7-6 (2), 6-1, and Evans topping Jan-Lennard Struff 6-1, 6-2.

Round-robin action Monday will feature Serbia vs. Chile in Group A, Germany vs. the United States and Canada vs. Great Britain in Group C, and Greece vs. Argentina in Group D.