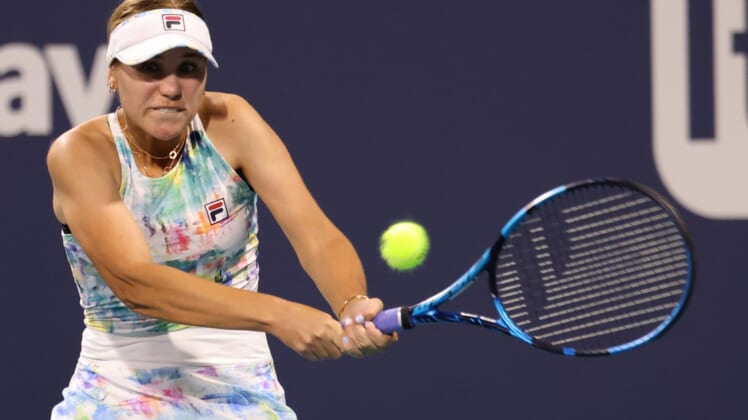 Mar 26, 2021; Miami, Florida, USA; Sofia Kenin of the United States hits a backhand against Andrea Petkovic of Germany (not pictured) in the second round in the Miami Open at Hard Rock Stadium. Mandatory Credit: Geoff Burke-USA TODAY Sports

Sofia Kenin clinched a spot on the U.S. tennis team for the Tokyo Olympics, becoming the first American to do so.

She is ranked fourth in the world in singles and is guaranteed to be one of the top four American women in the rankings after the French Open, when the teams will be set.

Currently trailing her are Serena Williams, Jennifer Brady and Alison Riske. While Williams and Brady appear to be strong contenders to clinch a Tokyo berth, the fourth spot is up for grabs, with Riske, Madison Keys, Jessica Pegula and Coco Gauff all in contention.

Kenin, a 22-year-old from Florida, said last month she planned to compete in her first Olympics this summer. She is a five-time winner on the WTA Tour, including the 2020 Australian Open.

Williams, 39, won the Olympic gold medal in singles in London in 2012 and is a three-time champion in doubles with her sister, Venus. The pair captured the gold in Sydney in 2000, Beijing in 2008 and London.

The U.S. also can name two more women to compete in doubles and mixed doubles only. Venus Williams, who turns 41 next month, could be named to the team. She has five Olympic medals — four of them gold.