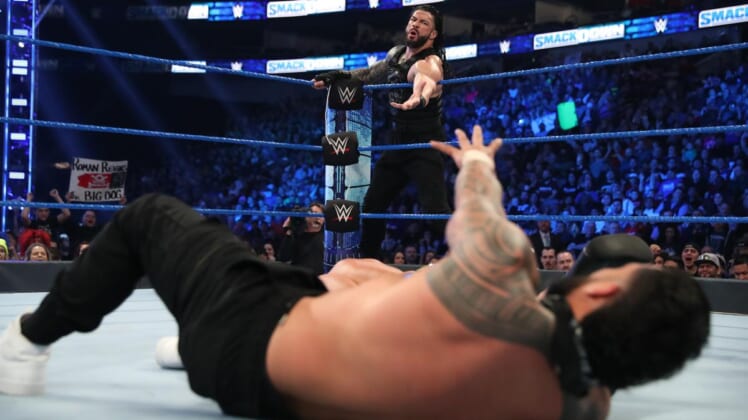 What does WWE have in store for the SmackDown roster following the Royal Rumble? Tune in to WWE Friday Night SmackDown live from Tulsa, Oklahoma on FOX this Friday at 8pm EST/7pm CST to find out what is next for stars of the SmackDown brand.

Who is The Fiend’s next victim?

Daniel Bryan and The Fiend had a brutal and very compelling match at the Royal Rumble. The feud seems to have ended at the Royal Rumble and there is no shortage of matches for The Universal Champion Bray Wyatt heading into WrestleMania 36.

Lacey Evans was the right choice

The scene was set to add some intrigue to the SmackDown women’s division with Lacey Evans as the SmackDown Women’s Champion. For some reason the WWE opted to go the other direction and have Evans lose cleanly to Bayley at the Royal Rumble. Does the classy southern belle get another crack at the champ?

The New Day is coming to an end soon

Another floundering division in the WWE is the SmackDown tag team division. The tag team talent underneath the SmackDown umbrella is ready, willing, and able to steal the show any given day.

SmackDown has talented teams like The New Day, Uso’s, Heavy Machinery, The Revival, and The Miz and John Morrison ripe for the picking. So why was there no exposure to the SmackDown tag team division at the Royal Rumble?

Braun Strowman will be the Intercontinental Champion soon

Will he get his opportunity this week on SmackDown to win his first singles title?

Who will Roman Reigns feud with next?

With a dominant win over his longtime rival King Corbin at the Royal Rumble what is in store for Roman Reigns next? Thankfully, WWE didn’t book Reigns to win the Royal Rumble match and made the smart choice with Drew McIntyre winning the Royal Rumble match. No matter his placement on the SmackDown card, Reigns will always be a big player in the WWE whether you love him or hate him.

After this year’s Royal Rumble there are many more questions than answers for the direction of the Smackdown roster headed into WrestleMania 36 in Tampa, Florida on April 5. This will make for some very great storylines for the blue brand in the weeks to come. Don’t miss out on all the action kicking off WrestleMania season for the SmackDown superstars this Friday at 8pm EST/7pm CST on Fox.