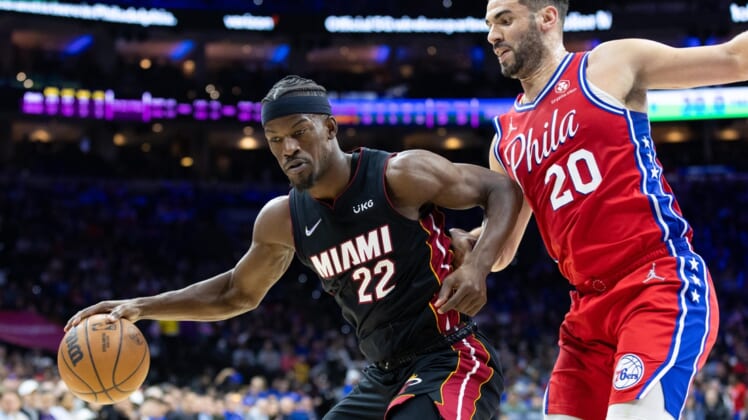 Furkan Korkmaz contributed 18, Georges Niang chipped in with 15 and Tobias Harris had 14 for the short-handed Sixers.

Since it was the second leg of a difficult back-to-back, the Sixers opted to play without All-Stars Joel Embiid (back) and James Harden (hamstring).

Paul Millsap responded with a three-point play and the Sixers regained a one-point advantage.

Butler converted a three-point play to equalize at 54 with 1:06 remaining.

The Sixers led 57-56 at halftime thanks in large part to Niang’s 13 points.

Butler paced the Heat with 15. Adebayo appeared to give the Heat a two-point advantage, but his deep 3-pointer was launched just after the buzzer sounded.

The game remained tight midway through the third with the Heat holding a 70-69 lead.

Butler then hit two free throws, Herro drove to the basket and scored and the Heat held a 74-69 advantage. Maxey came back with a trey to close within two with 3:14 left.

Philadelphia went ahead 80-78 at the end of the third.

Milton made consecutive baskets and the Sixers led 86-85 with 9:22 remaining in the fourth. On the Heat’s next possession, Lowry knocked down a 3-pointer and Miami moved back ahead by two.

Korkmaz soon made a trey, Harris hit a nifty shot just outside the lane and the Sixers took a 103-99 lead with 3:30 left.

When Maxey converted a three-point play high off the backboard with 2:18 remaining, the Sixers moved out to a 106-101 advantage.

Butler missed a 3-pointer and Maxey responded with a trey for an eight-point lead with 1:34 to go.