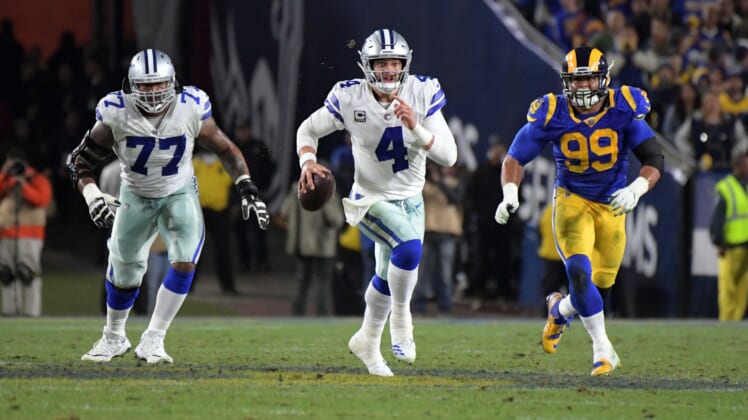 Come Week 1 of the NFL season, all teams will start off on an even playing field. Though as the season progresses, some franchises will start falling behind.

Whether this will happen due to poor performances, grueling NFL schedules or injuries, the following teams could take a big step back in 2019.

As it stands now, there is a huge aura of funk hovering over the Steelers’ franchise like a dark cloud. Minus some very disgruntled ex-teammates, quarterback Ben Roethlisberger might struggle to keep the Steelers’ ship afloat at times in 2019. He is not getting any younger and the absence of his trusty target in that of Antonio Brown is going to hurt. This is in no way a discredit to wideout JuJu Smith-Schuster, but defenses will be all about shutting down this young receiver.

The Steelers already took a tumble back in 2018, producing a 9-6-1 record. More doom and gloom could certainly present itself in 2019.

It is beyond time that quarterback Marcus Mariota turns a new leaf. The oft-injured quarterback should feel fortunate that the Titans managed to win nine games last season. But looking ahead to 2019, the Titans might be hard-pressed to repeat this many wins. Aside from an anemic passing game that could potentially see Ryan Tannehill under center, Tennessee has a tough schedule in 2019.

Facing the high-flying Houston Texans and Indianapolis Colts twice, the Titans will also square off against other formidable opponents such as the Chiefs, Panthers, Saints, Falcons and Chargers. Good luck to this team in advance.

While the Rams did make it to Super Bowl LIII, their journey to get there during the postseason was rough. We must remind you that quarterback Jared Goff threw only one measly touchdown in his three postseason games. Prior to this, Goff managed only two touchdowns between Weeks 13 and 16 with the Rams losing two of those games along the way.

Looking ahead to 2019, the Rams will be without longtime guard, Rodger Saffold. This does little to help Goff, let alone running back Todd Gurley who is dealing with a lingering knee injury. In addition, the Rams are minus some key defensive players who were on their roster last year. Another 13-3 finish might be pie in the sky for this coming season.

A big reason why the Cowboys managed 10 wins and a postseason visit was because of Dallas’ defense. This was a defense that allowed the fourth-fewest points (20.3) on average per game. Looking forward to 2019, the Cowboys could get off to a rocky start. Their star pass rusher DeMarcus Lawrence could potentially miss the early part of the season while he recovers from shoulder surgery.

On offense, it is anybody’s guess as to which version of Dak Prescott will show up on game day. The young quarterback will be tasked with facing six teams that made the playoffs last season. Plus, four of these six matchups will take place on the road. Overall, the Cowboys should have their work cut out for them.

The Dolphins finished in second place in the AFC East after winning seven games last season. But, this team should experience more pressure to finish in the same fashion with the Buffalo Bills and New York Jets seemingly poised for improvement this year.

Kicking things off, veteran quarterback Ryan Fitzpatrick will be the man under center. As witnessed last season and in years past, Fitzpatrick can have an awesome performance one week, followed by a hot mess of a performance in his next game. Plus, nothing about DeVante Parker, Kenny Stills or Brice Butler thrills as far as weapons for Fitzpatrick to succeed in 2019.

Led by ther recently traded Joe Flacco and youngster Lamar Jackson last season, the Ravens won the AFC North with a 10-6 record. But, can the team achieve an encore performance? Jackson will strive to continue to improve his passing game. Though, that may be a bit difficult considering the Ravens lack any elite talent at wide receiver.

A strong run game led by Mark Ingram will help. But the Ravens will need to lean on their defense in a big way to make a successful postseason run. It’s going to be made especially difficult with the Cleveland Browns looking like the most dominant team in the AFC North in 2019.