Signing A.J. McCarron would be a typical Browns move

Cincinnati Bengals backup quarterback A.J. McCarron is now slated to become an unrestricted free agent once the new league year opens up next month. This is an opportunity for him to cash in big time after starting a grand total of three games over the course of his four-year career.

Even with what’s expected to be a quarterback class that’s better than what we’ve seen in recent free agent years, McCarron offers something others on the market don’t: A legitimate amount of upside. Kirk Cousins is a Pro Bowl caliber player, but he’s seemingly already at his apex. Sam Bradford has proven himself to be a quality starter. He’s also among the most injury-prone quarterbacks in the game. Meanwhile, Case Keenum will have to answer questions about whether his 2017 campaign was an exception to the rule.

All the while, a quarterback in McCarron heads into free agency with multiple teams intrigued about what he can bring to the table. One of the teams that will surely show interest in the former Alabama quarterback is the Cleveland Browns — the very same team that almost landed him in a trade with Cincinnati during the 2017 season. Even after that trade fell through, Browns head coach Hue Jackson and owner Jimmy Haslam were seen chatting McCarron up prior to a Bengals-Browns game. The interest is real here. And now that Cleveland won’t have to exhaust a second-round pick to acquire him, that seems to be the most logical end result.

But we’re here to say that going after McCarron would be yet another huge mistake in a long line of mistakes from the downtrodden Browns franchise at the quarterback position. By now, we know the history of the Factory of Sadness. There’s no real reason to rehash it. We’re not that mean, Browns fans. 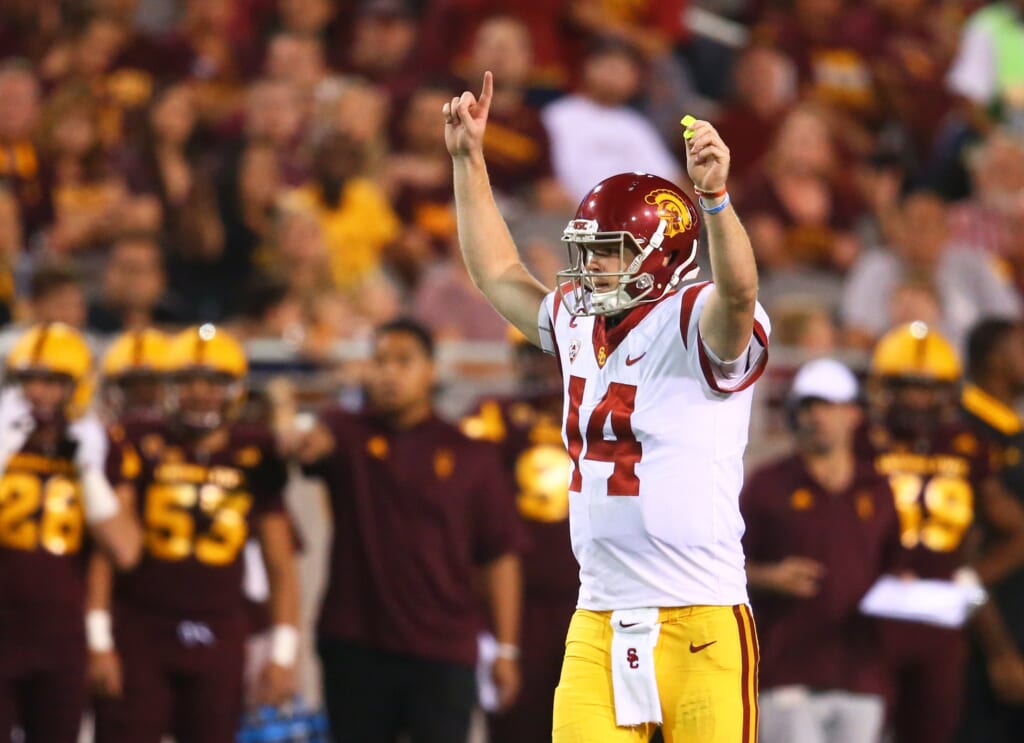 What we do know is that Cleveland boasts the first and fourth picks in April’s draft. It also has three second-round picks and two fourth-round picks. This comes in a draft class that might be among the best at quarterback in the recent history of the league. Even if the Browns decide to pass up on quarterback No. 1 by going with Penn State running back Saquon Barkley, it’s a good bet that either Sam Darnold or Josh Rosen will be available at four.

Is new general manager John Dorsey willing to pass up on a potential franchise quarterback in favor of giving what would be a fifth-year pro his first opportunity to start in the NFL? Remember, this is a quarterback that couldn’t beat out Andy Dalton for a job in Cincinnati. If Cleveland did go this route, it would be nothing less than a continuation of the very same problems that have plagued this organization since it re-entered the league nearly two decades ago.

Last year, it was the decision to trade down with Houston in order to help the Texans select Deshaun Watson. The previous year, these very same Browns traded out of the No. 2 overall spot with Philadelphia, giving the Eagles a franchise quarterback in the form of Carson Wentz. With a new chief in town, there’s no way Cleveland makes this mistake again, right?

That’s the dilemma for Dorsey. With what’s expected to be $110-plus million in cap room, Cleveland will be active in free agency. That’s not a bad thing. Coming off just the second winless 16-game regular season in NFL history, the Browns can’t simply rely on the draft to turn this thing around. Look at the Los Angeles Rams and Jacksonville Jaguars last season. Both teams used free agency as a way to team build, making it a secondary philosophy behind the draft itself. Cleveland must do the same thing this spring.

If that’s the case (and everyone knows it is), why not shoot for the stars with Kirk Cousins? At the very least, Cleveland knows it’s getting a Pro Bowl caliber quarterback in this scenario. Heck, future Hall of Fame Browns tackle Joe Thomas knows this.

That’s the juxtaposition. Spending Mike Glennon money ($15 million per season) on a quarterback we really know nothing about makes less sense than doling out $30-plus million to a proven starter in Cousins. If the Browns are indeed looking at free agency to add a quarterback, they must go after the best of the bunch.

These second-tier signal callers will do nothing to further the organization and get the fans excited about what has been a horrible product. And if they were to miss out on Cousins, one of those two top-five picks are ripe for adding that franchise-type signal caller.

It’s time the Browns stop making a mockery of themselves and actually act like a real NFL team. Spending a boatload of cash on the unproven McCaron wouldn’t do that. Instead, it would just further the narrative that the real mistake by the lake has not been placed in the ash heap of history, and remains very much alive today.

That’s this one scribe’s take.