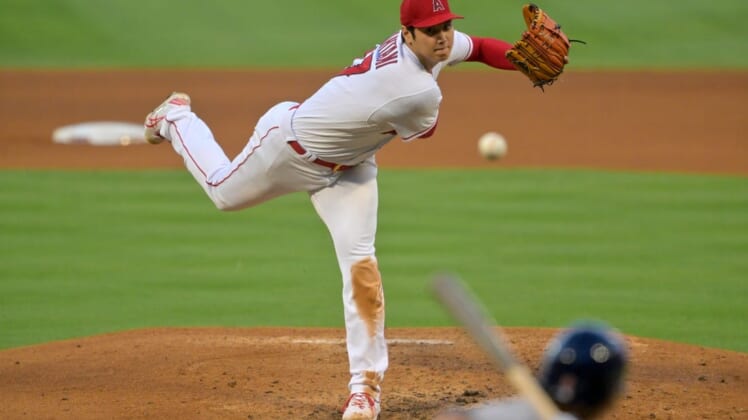 Shohei Ohtani gave up one run with 12 strikeouts in six innings on the mound, had a two-run triple at the plate, and led the Los Angeles Angels to a 7-1 victory over the Houston Astros Wednesday night in Anaheim, Calif.

Ohtani has been nearly unhittable as of late, going 6-0 with a 0.45 ERA (two earned runs in 39 2/3 innings) over his last six starts. When the Astros scored a run in the fourth inning Wednesday, Ohtani’s scoreless innings streak (earned runs) ended at 31 2/3 innings.

It was Ohtani’s fourth game in a row with double-digit strikeouts, and he gave up just four hits while making 105 pitches. He’s thrown at least 100 pitches in five of his last six starts.

At the plate, Ohtani had the key hit of the game with a two-out, two-run triple in the second inning off Astros starter Cristian Javier (6-5) that gave the Angels a 3-0 lead.

He became the first Angels starting pitcher to hit a triple in 50 years, accomplished the last time by Nolan Ryan in June of 1972. (Jim Abbott had a triple in a spring training game in 1991.)

The win for the Angels ended their losing streak at five. In their last 13 games, they are 3-0 in games in which Ohtani pitched, and 0-10 without Ohtani on the mound. They haven’t won a game in which Ohtani did not pitch since June 27.

Ohtani had help on Wednesday, as the Angels had 12 hits, including three by Luis Rengifo and two each from Jo Adell and Andrew Velazquez.

Despite giving up the early runs, Javier had eight strikeouts through three innings. He was done after just 3 2/3 innings but finished with 10 strikeouts.

Astros catcher Martin Maldonado had two of the Astros’ four hits. Yuli Gurriel’s RBI single in the fourth inning accounted for Houston’s only run of the game.