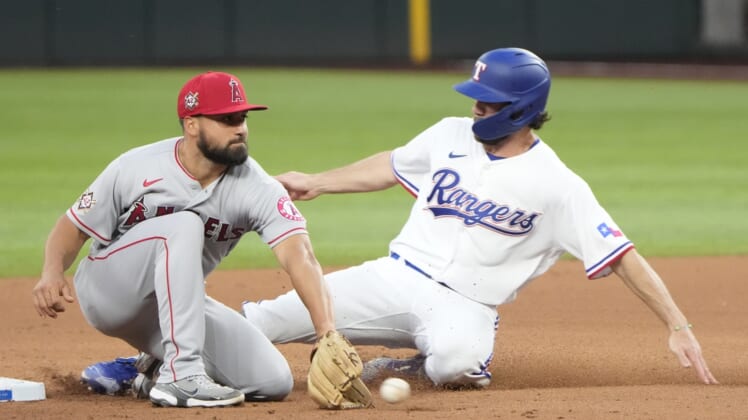 Shohei Ohtani hit two of the Angels’ five home runs as Los Angeles came from behind for a 9-6 victory over the Texas Rangers on Friday night in Arlington, Texas.

The homers for the defending American League MVP were his first and second of the season, helping the Angels rally from a four-run deficit to win the second game of the series following a Thursday loss.

Austin Warren (1-0), one of four Angels relievers, got the victory, while Raisel Iglesias pitched a scoreless ninth inning for his second save. Rangers reliever Kolby Allard (0-1) took the loss after yielding five runs in 1 1/3 innings.

The Angels immediately responded with a five-run inning of their own to regain the lead. Homers by Suzuki (solo) and Ohtani (two-run), an RBI single by Walsh and a sacrifice fly by Brandon Marsh put the Angels up for good.

Ohtani hit the first pitch of the game — a 96 mph fastball from Rangers opener Mike Bush — over the fence in right field for his first home run of the season.

Last season while socking 46 home runs, Ohtani hit one homer every 11.7 at-bats, but it took him until his 30th at-bat to get his first this season. Bush was finished after one inning, but he responded to Ohtani’s home run by striking out Trout, Walsh and Anthony Rendon.

Charlie Culberson had a two-run double and a run-scoring groundout for the Rangers, who got two hits of their eight hits from Nick Solak.