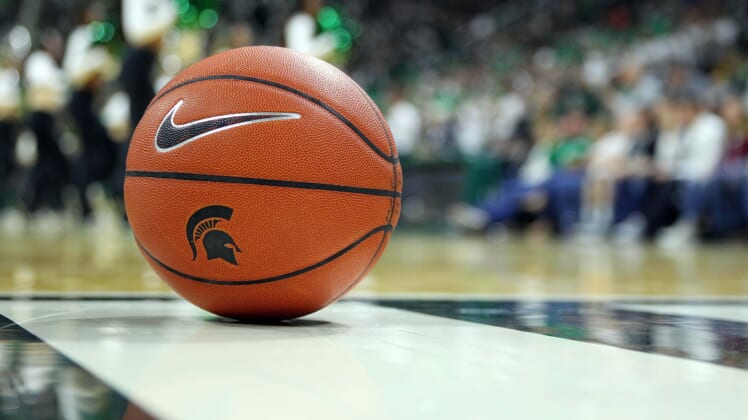 Dec 12, 2015; East Lansing, MI, USA; General view of a basketball on the court during the 2nd half of a game between the Michigan State Spartans and the Florida Gators at Jack Breslin Student Events Center. Mandatory Credit: Mike Carter-USA TODAY Sports

A former strength and conditioning coach for Michigan State University’s basketball team was texting and looking up strip clubs when he crashed his car, which killed a woman and her child.

According to The Detroit News, an investigation found that in the five minutes before the crash, Todd Matthew Moyer conducted a Google search for strip clubs in Delaware, Ohio and texted the link one minute before the crash.

According to the report, Moyer exchanged several text messages in the moments before the collision, and his only unread text message occurred immediately after the crash in July of 2017. After the collision, Moyer texted someone about what happened.

According to the report, Moyer’s vehicle collided in a construction zone with the victim’s car. Prosecutors said he never attempted to slow down in the construction zone, driving at a constant 78 mph for at least five seconds before the crash.

Gladys Jonson, 36, and her 5-year-old daughter were killed in the crash. Moyer was found guilty on two counts of reckless driving.

Moyer was employed at Michigan State at the time of the crash, but he is no longer employed by the school.