With NFL training camps in full swing, there is so much news to report. However, some players are making bigger impressions than others with strong play right out of the gates.

We already covered some disappointing training camp situations, this week, so here now is a look at seven players who shined and turned heads this week at camp.

We’ll offer a two-for deal here as we take a look at how both Eagles quarterbacks have stood out thus far in training camp.

Bradford appears to be back to full health and took 11-on-11 snaps in training camp for the first time since tearing his ACL last preseason.

Sam Bradford taking the first 11-on-11 snap of training camp for Eagles, and his first since blowing out his knee last August.

Reportedly, Bradford’s favorite target is wide receiver Jordan Matthews, who he has connected with several times. He also threw a dime to running back Ryan Mathews on a wheel route, though Mathews dropped the pass.

As for Tebow, it is reported that he is extremely hard to tackle (not surprising), and according to Brandon Lee Gowton of Bleedinggreennation.com, the quarterback looks the best he has since starting practice.

It was also noted that Tebow has been incredibly accurate and has been able to get rid of the ball quickly. While we expect Bradford to get the nod to start ahead of Tebow and Mark Sanchez, it appears as if there is some legit competition happening in Philly.

Palmer has reportedly been working on his footwork which in turn has quickened his release, as noted by ESPN’s Josh Weinfuss.

Palmer, who is coming off of ACL surgery, had this to report on his progress:

Prisco: Cardinals QB Carson Palmer looks 'better than he was before he got hurt' http://t.co/LjhPdTxa1x #NFL #fantasyfootball

The Bills already gave Incognito the nod as the team’s starting left guard for 2015. That news comes from reports that head coach Rex Ryan said he was “blown away” by how well-conditioned Incognito is after missing a season and-a-half.

Rex Ryan gushing over Incognito. Says he will start and Ryan has been "blown away" by how well-conditioned he is after the season off.

Incognito is ready for action and reported this after the Bills first padded-practice, though perhaps on second thought he should have kept it to himself:

“Out there with your buddies, beating people up. That’s what I like to do.” 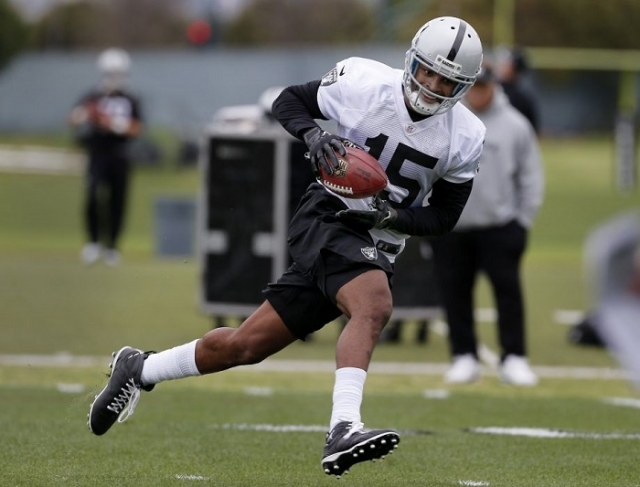 Crabtree comes to Oakland after an uneventful season with the San Francisco 49ers. To nobody’s surprise, his former team let him test the free agency in the spring, but perhaps the move was made in haste.

So far during training camp, Crabtree is getting the attention of head coach Jack Del Rio, who reported:

“He stood out today, made some nice catches,” Del Rio said, via the Contra Costa Times. “Mike’s a proven player. I don’t think we have to worry much about Mike.”

It is also noted by Vic Tafur of The San Francisco Chronicle that Crabtree is “looking like the Raiders’ No. 1 receiver.”

Crabtree needs to make his mark this season as he is on a one-year deal that could send him to the unemployment line should he fail to impress.

So far, it looks like things are working out in his favor.

The Lions second-round draft pick has been impressing the team so far this August. Reportedly, the rookie is quickly reading his runs and is already completely eluding defenses at times.

Rookie RB Ameer Abdullah generating buzz at Lions training camp: Riddick is also in the mix at running back, a… http://t.co/E3N8g5d9Ia

With veteran running back Joique Bell sidelined due to an Achilles and knee injury, Abdullah, joined by running back Theo Riddick, appear to be key backs for the Lions offense moving forth.

It was noted after the first day of training camp that Abdullah was better than all his running back competition, including Riddick. Catching the attention of head coach Jim Caldwell, he reported this of the young back:

“You can see it out on the field,” coach Jim Caldwell said (via mlive.com). “He’s moving better, his reaction times are better. So certainly, when we get pads on, we’re excited to see what he can do.”

Someone has to pick up the slack left by former running back DeMarco Murray and the guy looking impressive in Dallas is third-year rusher Randle.

According to Tom Cowlishaw of The Dallas News, he claims Randle is faster than Murray.

Randle didn’t get much opportunity to show off his talents last season. However, when given the opportunity, he rushed for 343 yards and three touchdowns at the lightening pace of 6.7 yards per attempt.

Randle should be exciting to follow as he competes to be the Cowboys next star rusher.

Titans first-round draft pick Mariota appears to be exceeding expectations and has reportedly gone six straight days in practice without an interception.

It appears from this report that second-year quarterback Zach Mettenberger will indeed be the guy on the bench this season.

It can't be overstated how sharp Mariota looks in practice, and that's before you get into a comparison with Mettenberger. Not even close.

On Wednesday it was reported that Mariota completed eight of ten passes in which two were dropped. One of the eight turned into a nice touchdown grab by wide receiver Kendall Wright.

While it is fabulous to hear such high praises regarding Mariota and easy to become excited, the team has much work ahead to improve on its pitiful 2-14 2014 season.

As for this list of players, we will have to witness what they bring to the table once the preseason games kick off later this month.