Rumors are certainly ramping up in regards to a potential Karl-Anthony Towns trade this coming summer. Reports suggest that the Minnesota Timberwolves and their franchise-altering big man are not in a good place.

Things could be blown up once the NBA Playoffs are over. It’s at the point where other teams are actually calling Minnesota up about the 22-year-old All-Star.

Should the Wolves move Towns, here’s a look at the seven likeliest trade scenarios for the 7-foot center. Keep in mind, none of these deals would give Minnesota fair market value. It’s almost impossible to reach that plateau when talking about one of the game’s top-five offensive forces.

Details: Towns and Jeff Teague to the Suns for Josh Jackson, Jared Dudley, Tyson Chandler and the first overall pick 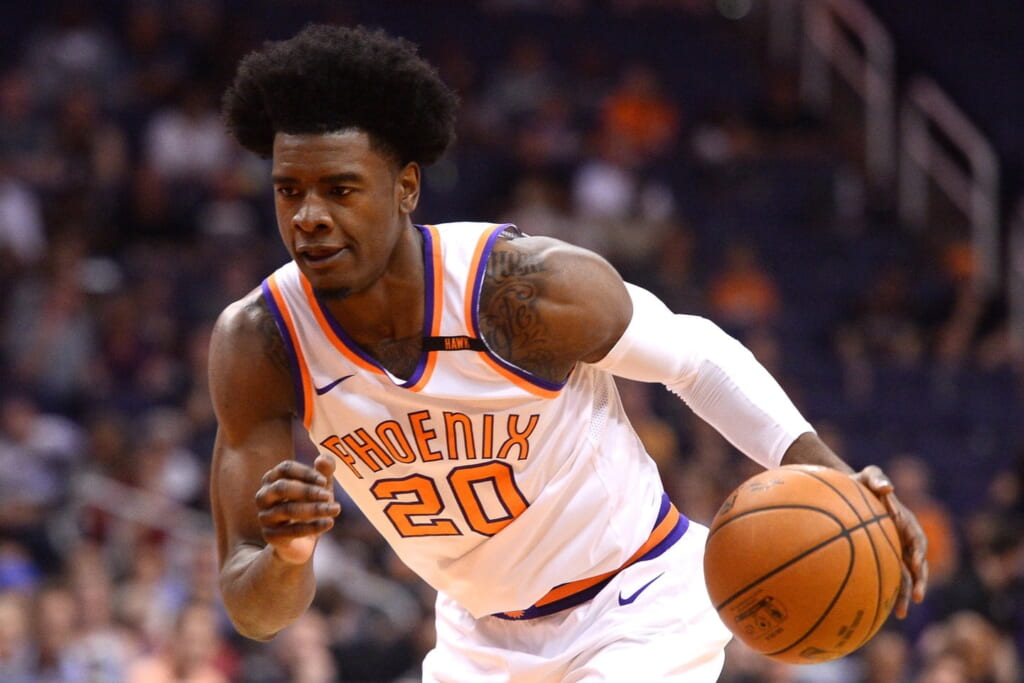 Minnesota would be picking up two expiring deals in that of Dudley and Chandler while adding a lottery pick in Jackson from last year’s draft. It would also be acquiring the first pick in a draft that’s absolutely loaded with talent. This could net the team either DeAndre Ayton to replace Towns at center or European sensation Luka Doncic in the backcourt.

This might be a bit too much for Phoenix to give up, but it would enable the team to pair Towns with another elite-level young player in Devin Booker. Add in the presence of T.J. Warren, and the Suns would have a nice young core to build around.

The idea here would be for Boston to rely on a combination of Marcus Smart and Terry Rozier at point guard. It’s worked out well for the team during the playoffs. In reality, Boston might be in a situation where it has proven the team doesn’t necessarily need Irving moving forward.

Why not use Irving and his status as an All-Star to add another young foundational piece to go with Jaylen Brown and Jayson Tatum? From a Wolves perspective, Irving would give the team another elite-level perimeter option to go with Jimmy Butler. They’d also have the ability to add another star-caliber player in a trade with the two first-round picks as well as a youngster in Semi Ojeleye.

Hield has not morphed into the star that Sacramento was expecting when he was acquired as the centerpiece in the DeMarcus Cousins trade back in February of 2017. With that said, he could very well still be a tremendous asset to a Wolves squad that boasts a score-first wing in Jimmy Butler. By adding Hield and another youngster in Cauley-Stein from Sacramento, a nice foundation would be etched in stone here. Add the No. 2 overall pick in a loaded draft, and that’s magnified further.

The status quo obviously isn’t working for the Kings themselves. Despite adding a plethora of youngsters, Sacramento finished with a 27-55 record this past season. It’s the 10th consecutive season this team has posted 33 or fewer wins. Adding Towns and his star power to go with youngsters Justin Jackson, De’Aaron Fox and Bogdan Bogdanovic would be an absolute coup. 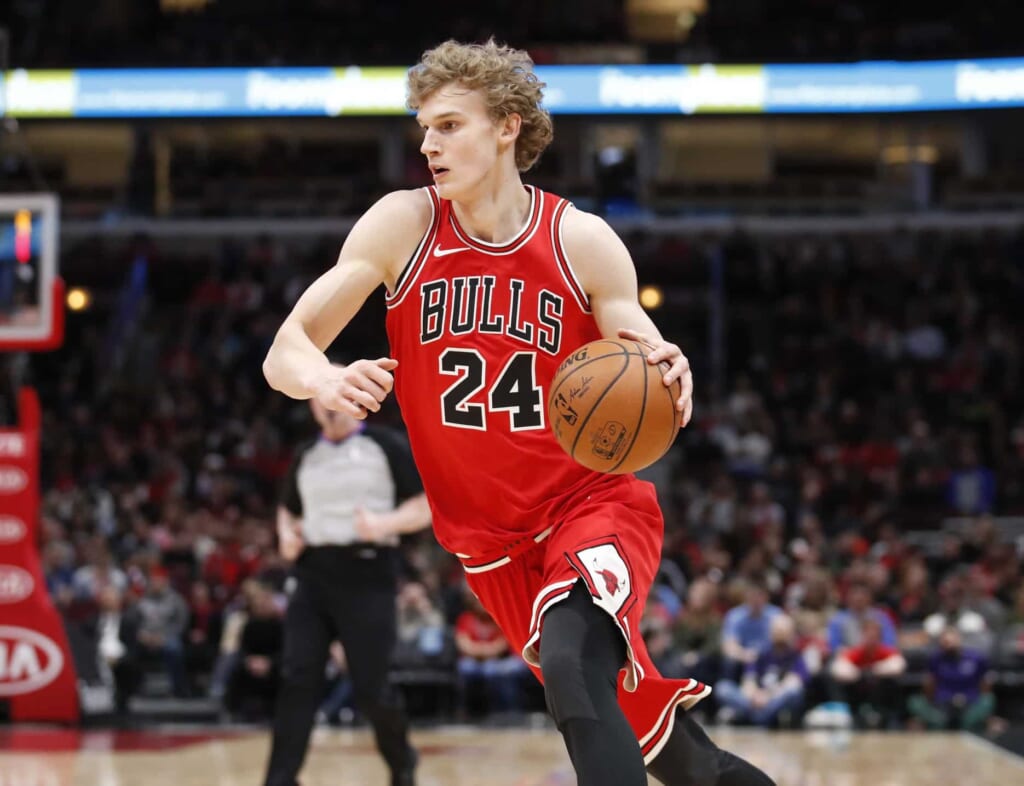 To say that Chicago is in the midst of a long-term rebuild would be an understatement. It remains one of the most talent-stricken teams in the Association. The one exception here is a player in Markkanen who was just named to the All-NBA Rookie Team. Does this mean that Chicago would even consider giving up the 21-year-old forward in a trade for Towns? We have absolutely no idea.

What we do know is that Towns is already a game-changer. It’s something the Bulls hope Markkanen will eventually turn into. This trade would also give Minnesota a young forward to build around with the likes of Jimmy Butler and Andrew Wiggins out on the wing.

This might be a tad too much for the Lakers to give up. Both Ingram and Kuzma earned All-NBA Rookie honors in their first seasons. They have to be seen as potential building blocks moving forward. With that said, the Lakers and president Magic Johnson have made it clear they’re going all in this summer. Adding someone of Towns’ ilk who is under his rookie contract wouldn’t prevent the Lakers from signing two max-contract players in free agency. Hi, LeBron James and Paul George.

From a Wolves perspective, this might be the best hypothetical trade offer they’ll receive. Both Ingram and Kuzma project as decade-long starters in the NBA. This trade would also enable Minnesota to potentially ship an under-performing and expensive Andrew Wiggins to another team in a separate trade. Blow the whole thing up, one might conclude.

Details: Towns and Jeff Teague to the Sixers for Dario Saric, Robert Covington, Jerryd Bayless and the 10th overall pick

Despite a surprise run to the Eastern Conference Semifinals this year, the Sixers themselves are primed to be big-time players come summer time. That includes potentially chasing after LeBron James. Much like what we mentioned with the Lakers, a trade for Towns wouldn’t prevent Philadelphia from making a big splash in free agency.

Boasting the 10th pick from the above-mentioned Lakers, Philadelphia could very well ship that selection in a package with two starter-caliber players in Saric and Covington for Towns. It’s a solid package for the Wolves and enables the team to get out from under Jeff Teague’s deal while picking up Bayless’ expiring contract.

Details: Towns and Gorgui Deng to the Spurs for Kawhi Leonard and Dejounte Murray 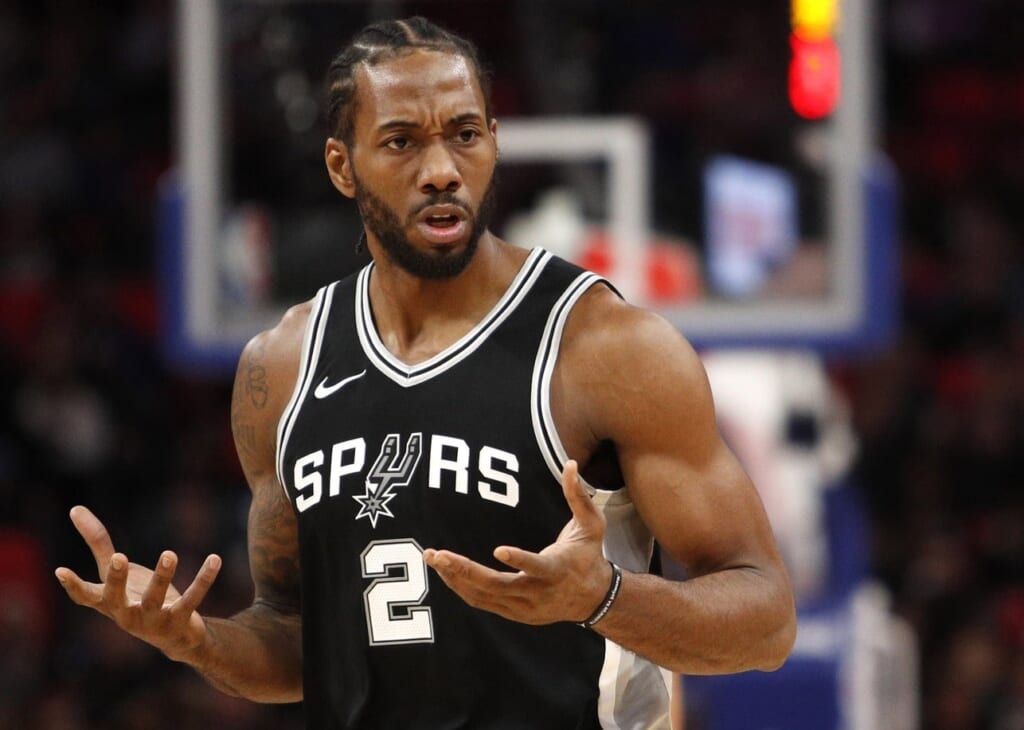 We already know tha Leonard is on the trade block after an injury-plagued 2017-18 campaign that saw him miss all but a couple handfuls of games. We also know that Leonard and head coach Gregg Popovich are not in the best of places right now. Should San Antonio look to move Leonard, it will also be demanding a king’s ransom in return.

That’s where Towns and the Wolves come into play. With Tom Thibodeau’s style primarily relying on defense, adding a former Defensive Player of the Year in Leonard would be a nice scheme fit. Minnesota would also be picking up a solid young point guard in Murray while forcing the Spurs to eat Deng’s contract. Pop and Co. would be getting a potential franchise cornerstone with an opportuniy to mold Towns more into their way of thinking. It’s a perfect scenario.