Sergei Bobrovsky bounces back to lead Panthers over Capitals 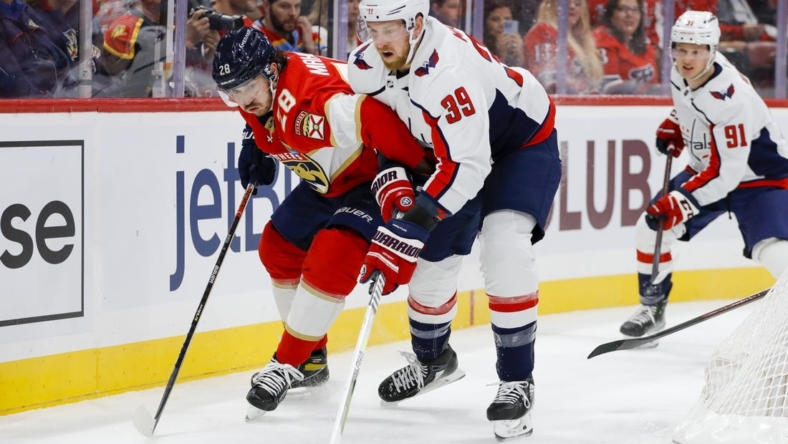 Sergei Bobrovsky made a season-high 40 saves to earn his first victory since Nov. 3 as his Florida Panthers defeated the visiting Washington Capitals, 5-2, Tuesday night in Sunrise.

Washington went 0-for-5 on its power play. Florida went 1-for-1 with the man advantage, and the Panthers kept Capitals star Alex Ovechkin off the scoresheet.

Bobrovsky had dropped four of his past five games entering Tuesday, and that caused him to losing playing time to backup Spencer Knight.

Verhaeghe leads the Panthers with 10 goals.

Dylan Strome and John Carlson scored for the Capitals, who got 39 saves from Darcy Kuemper. Carlson added one assist.

Florida opened the scoring with 5:45 expired in the first period. Following a Capitals turnover, Barkov picked up the loose puck and fired from the high slot. His shot bounced in off of Kuemper for Barkov’s fourth goal of the season and his first five-on-five.

The first period ended with Florida owning a 21-9 shots-on-goal advantage.

Florida extended its lead to 2-0 on Reinhart’s power-play goal with 3:46 gone in the second. Kuemper blocked an Aaron Ekblad shot, but Reinhart whacked at the rebound in the air, knocking the puck into the net.

That power play was set up when Lars Eller was penalized for a high hit on Verhaeghe.

Washington finally got on the board with just 4:56 left in the second. Skating 4-on-4, Strome took a drop pass from Joe Snively and knocked in a shot from just beyond the left circle. The puck appeared to be deflected by Panthers defenseman Marc Staal, causing it to flutter above Bobrovsky’s blocker.

Importantly, the Panthers killed off three Capitals penalties in the second period, which allowed Florida to take a 2-1 lead into the third.

The Panthers then extended their lead to 3-1 with 12:56 remaining in the third as Cousins collected a rebound and wrapped the puck around Kuemper.

Washington cut its deficit to 3-2 on Carlson’s deflection with 8:45 left.

Then, Florida put the game away on Verhaeghe’s rebound goal with 3:00 remaining. Kuemper was way out of position on the play, leaving the goal open for Verhaeghe, who added an empty-netter with 1:24 left.