Serena Williams out at Wimbledon with injury after slip 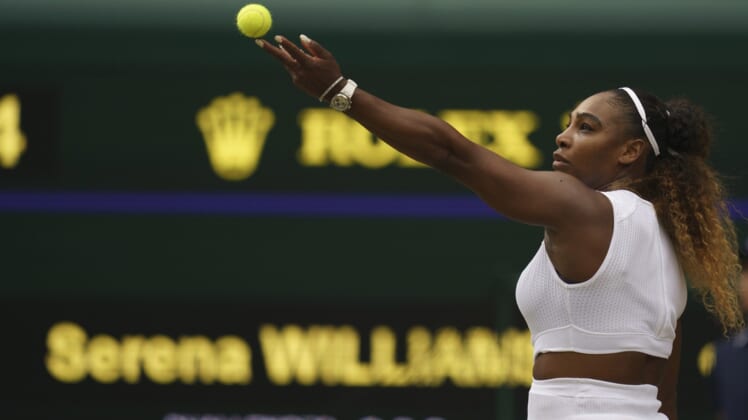 A teary-eyed Serena Williams was forced to retire from first-round action at Wimbledon on Tuesday after sliding on the grass court and sustaining an injury at the All England Club.

Williams, the No. 6 seed, was tied 3-3 in the first set against Aliaksandra Sasnovich of Belarus when she retired. Playing on Center Court, she slid on the damp grass and appeared to injure her right leg. The roof was closed on a rainy London day, but throughout Tuesday’s telecast, announcers said humidity in the building led to moisture on the surface.

“We’re heartbroken for you, Serena,” Wimbledon tweeted after Williams retired.

We’re heartbroken for you, Serena.

Our seven-time singles champion is forced to retire from The Championships 2021 through injury#Wimbledon pic.twitter.com/vpcW1UN78s

Earlier in the day, Adrian Mannarino of France was leading Roger Federer two sets to one in the fourth set when he slipped and fell. Federer was up 4-2 in the set at the time, but Mannarino tried to fight on, lost the set, and then retired.

“You have to move very carefully out there and if you push too hard at the wrong moment, you do go down,” Federer said of the conditions after his match.

Williams, 39, is a seven-time Wimbledon champion and four-time runner-up, and has won 23 Grand Slam tournaments in all. Williams is now 77-2 in the first round at a Grand Slam. Her only other first-round exit came against Virginie Razzano of France in three sets at the 2012 French Open.

She has been trying to win her 24th Grand Slam, which would tie Margaret Court for the most all time, since 2017. Giving birth to her daughter, injuries and the interruption of play because of the coronavirus pandemic have stalled her quest.