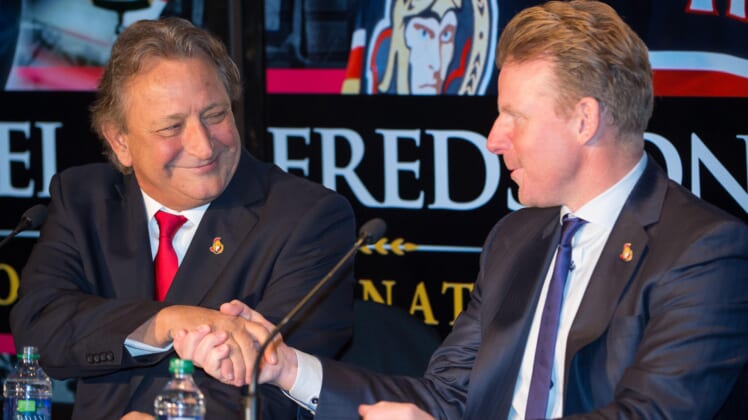 Eugene Melnyk, who owned the Ottawa Senators for the past two decades, died Monday at age 62.

According to a statement from the team, Melnyk died “after an illness he faced with determination and courage.”

Though the team didn’t elaborate on his illness, Melnyk had received a liver transplant in 2015.

A Toronto native, the son of Ukrainian parents, Melnyk bought the Senators for $92 million in 2003.

NHL commissioner Gary Bettman said in a statement, “The words ‘passion’ and ‘commitment’ define the man who has owned the Ottawa Senators since 2003. Whether it was in the boardroom with his fellow governors, at the rink with his beloved Senators or in the community with his philanthropy, he cared deeply about the game, about his team and about bettering the lives of those in need, particularly underserved children, organ donation and, most recently, with his commitment to his parents’ home country of Ukraine.”

Senators captain Brady Tkachuk tweeted, “Mr. Melnyk provided me, my teammates, and many Sens players who came before us with an opportunity to live out our dream. The Ottawa community will miss you greatly. Condolences to your family.”

Melnyk’s estimated net worth was more than $1.2 billion, built on his involvement with multiple companies, including Canadian pharmaceutical firm Biovail Corp.

The Senators, an NHL expansion team in 1992-93, reached their only Stanley Cup Final in 2007. Currently with the second-lowest point total in the Eastern Conference, they are likely to miss the playoffs for the fifth consecutive year.