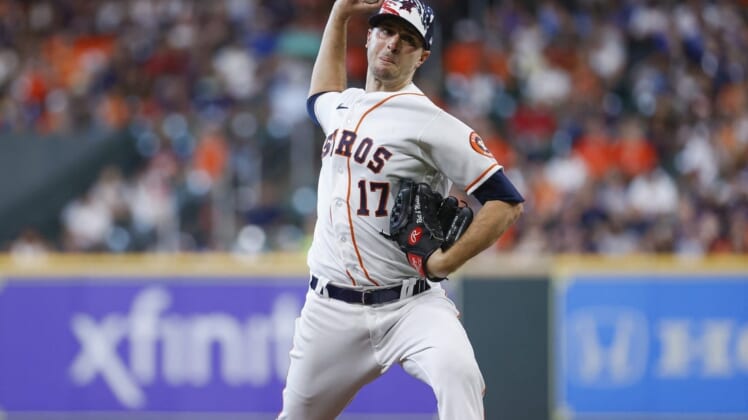 With just one game remaining before the All-Star break, the Houston Astros received from Justin Verlander exactly what they needed on Saturday: a dominant performance that helped salvage their bullpen.

Verlander worked six shutout innings and recorded 10 strikeouts in the host Astros’ 5-0 victory over the Oakland Athletics in the second game of a three-game series that will conclude Sunday.

Verlander labored a bit in a 23-pitch first inning but settled in to deliver his sixth scoreless effort of the season, a showing that enabled the Astros to save high-leverage relievers Ryne Stanek, Rafael Montero and closer Ryan Pressly for the series rubber match on Sunday after the A’s won the opener 5-1 on Friday.

“He gave us all he had, and we’re glad to get that sixth inning because it looked like at first he was going to have trouble going five,” Astros manager Dusty Baker said. “Verlander was outstanding. Now he can take a rest for a few days and get ready for the second half.”

Given his workload of 109 1/3 innings during the season’s first half, Verlander (12-3) is unlikely to make an appearance Tuesday in his ninth All-Star selection.

It’s doubtful anyone associated with the Astros’ organization would oppose Verlander making a token appearance during introductions at Dodger Stadium. Armed with the second-best record in the American League, the Astros are more concerned with keeping Verlander healthy and closing the first half with a flourish.

Right-hander Jake Odorizzi (4-2, 3.38 ERA) is the scheduled starter for the Astros in the series finale. He threw seven scoreless innings against Oakland in his second start since his reinstatement from the injured list, allowing four hits and one walk with seven strikeouts in a 6-1 victory on July 10.

Odorizzi was saddled for five runs on nine hits and one walk over four innings against the Kansas City Royals on July 4, his first appearance following a 42-game stint on the injured list with a lower-leg tendon strain. He is 4-0 with a 1.87 ERA in his last six starts.

Odorizzi is 2-4 with a 3.58 ERA over 11 career starts against the Athletics. His previous start was his first against Oakland this season.

The A’s are expected to start right-handed rookie reliever Adam Oller (0-3, 9.00), who hasn’t pitched since tossing a scoreless inning against the New York Yankees on June 29.

He hasn’t faced the Astros.