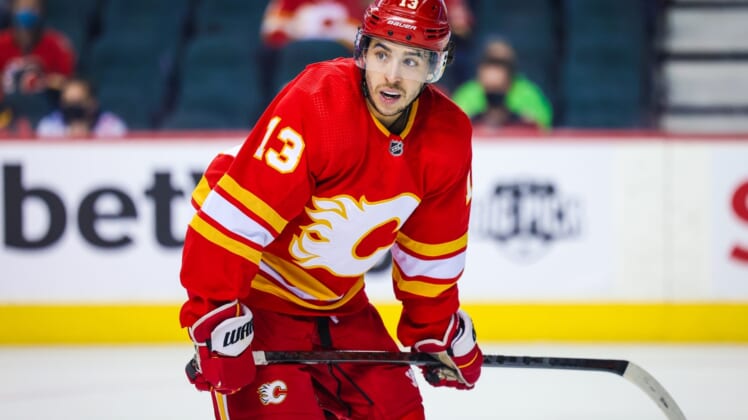 The Calgary Flames hope a visit to Arizona will provide them with a strong opportunity to continue their surge heading into the All-Star break.

The Flames will aim for a third straight victory Wednesday in Glendale, Ariz., against a Coyotes club that will try to win back-to-back games for the first time in two weeks.

After losing five of six from Jan. 4-22, Calgary has won four of five. On Tuesday night at Dallas, the Flames erased a 3-1, third-period deficit by scoring three times in 3:37 to stun the Stars with an inspiring 4-3 victory.

Andrew Mangiapane moved into a tie for the team lead with his 20th goal — his 19th on the road — and Johnny Gaudreau recorded his 18th, and second in two games, as 11 different Flames earned a point.

In the mix for a playoff spot in the Western Conference and brimming with confidence at the moment, Calgary last won three in a row overall from Nov. 29-Dec. 3. The Flames also have won two of their past three road contests after dropping four straight away from home.

“We’re a team that relies on everyone, and we need everyone to be good every single night,” veteran forward Milan Lucic said. “That’s where we need to continue to push each other.”

Calgary goalie Jacob Markstrom (16-10-5, 2.20 goals-against average) had posted two shutouts in his previous three starts before stopping 20 of 23 shots in two periods Tuesday. Flames coach Darryl Sutter, looking for a spark, put Dan Vladar in for the third period, during which the substitute stopped all five shots he faced.

Vladar, whose last start came on Jan. 7, has a 4.69 goals-against average during a three-game starting losing streak.

With the All-Star break on tap, Markstrom could start against the Coyotes, who sit last in the Western Conference with 11 victories and 26 points. However, Arizona’s 3-2 shootout victory at Colorado on Tuesday not only ended its five-game losing streak, but it halted the Avalanche’s 10-game winning streak.

“We battled all night,” Coyotes goaltender Scott Wedgewood, who made 38 saves, told Bally Sports Arizona. “Just keep going, keep the consistency. Maybe that will be the mantra for the second half (of the season).”

Clayton Keller, who leads the Coyotes with 36 points, has at least one point in five consecutive games. He has logged three goals and six assists over his last eight contests. Keller has three goals and four assists in 12 career games vs. Calgary.

Wedgewood could make back-to-back starts as he attempts to end a five-game home losing streak during which he has a 3.09 goals-against average. Meanwhile, teammate Karel Vejmelka has allowed 15 goals while losing his past three starts.

Calgary has won two straight against Arizona and six of the past eight meetings. However, the clubs are meeting for the first time since March 6, 2020.

Gaudreau has eight goals and 13 assists in 25 career games against the Coyotes.