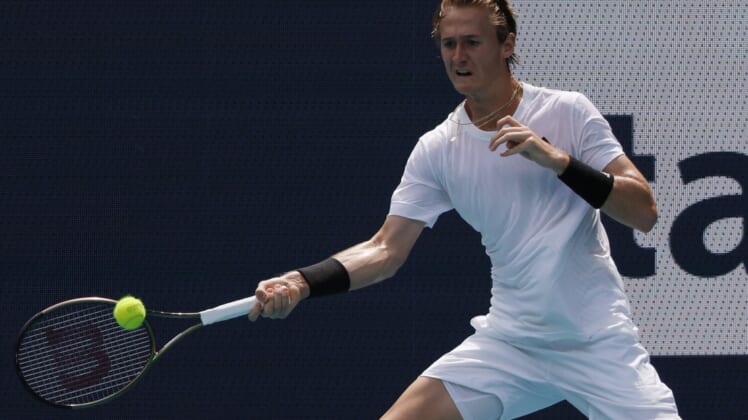 American Sebastian Korda scored a big upset on Wednesday when he recorded a 7-6 (2), 6-7 (5), 6-3 victory over eighth-seeded Carlos Alcaraz of Spain in the second round of the Monte Carlo Masters at Monaco.

The 21-year-old Korda had 43 winners and overcame 54 unforced errors to win in just over three hours in windy conditions on the clay-court surface.

“It was nice to get the victory,” Korda said on-court after the match. “I stayed calm and believed in my returning. It was super tough, every time he threw up the ball it moved around. It was a crazy match.”

Alcaraz hit 24 winners and committed 36 unforced errors. The 18-year-old couldn’t keep his game on par with Korda in the final set.

“I’m a bit disappointed with myself,” Alcaraz said. “I had a lot of chances to be up in the match and (be) close to winning, but these losses sometimes are good to (have). You have to play matches.”

Italy’s Lorenzo Musetti also pulled off an upset, beating sixth-seeded Canadian Felix Auger-Aliassime 6-2, 7-6 (2). Musetti had 20 winners against 17 unforced errors while Auger-Aliassime had 21 of each.

“My backhand down the line was a key to many of my great shots,” Musetti said afterward. “After a really good first set, he came back with such powerful serving, but I was calm and patient and that was the most beautiful thing about today.”

Second-seeded Alexander Zverev of Germany advanced with a 6-1, 7-5 win over Federico Delbonis of Argentina. Zverev had a 19-to-6 edge in winners.