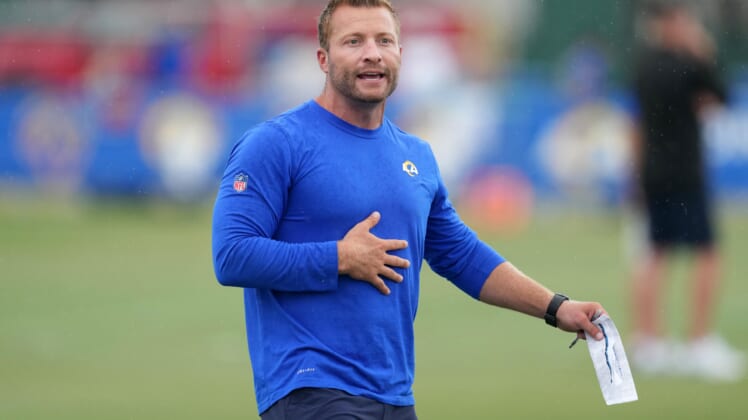 Shortly after winning his first Super Bowl as head coach of the Los Angeles Rams, rumors started to swirl of Sean McVay’s potential departure from the team. It’s not that the Rams didn’t want the 36-year-old coach to return for a sixth season. Instead, the idea centered around McVay taking a TV gig, pursuing a job that paid him more than he previously earned, with a lot less stress involved.

Plus, he’d never have to take another gameday loss again.

Even dating back to the postseason, reports emerged about McVay potentially walking away from the game due to the day-to-day stress and pressure involved with the high expectations revolving around having a roster capable of winning a Lombardi Trophy.

But now that he’s won, all that talk seems to have disappeared, with McVay all in on being the coach of the Rams. Amazon did offer McVay a lucrative contract to join their broadcast crew, but evidently, the Rams coach never even sat down to meet with the company.

McVay spoke about his unique offseason and what his thought process was while it all transpired.

Sean McVay is as committed as ever to coaching

Rams general manager Les Snead heard all the chatter, and he wanted to get to the root of how McVay truly felt about his future coaching the Rams. But after talking with his head coach, Snead realized McVay wasn’t about to change professions. Not yet anyway.

Though it’s not like Snead had to convince McVay, as the coach had already come to the conclusion that he could just as easily try the television thing later, if he wants. For now, he’s all about trying to help the Rams become the first team since the New England Patriots did so from 2004-2005.

“But I’m nowhere close to feeling like I don’t want to coach. This offseason has really reminded me of what I love so much about it. I was reminded of that even before we won the Super Bowl last year. When it gets back to taking a step outside some of the things that you lost your way a little bit about and just becoming more about, ‘Why do you love coaching and doing these things?’ It’s to lead better. It’s to use the platform the right way to influence and affect people in a positive way. That, to me, is where it’s really enjoyable. You’ve got people who you love doing it with,” said McVay.

McVay is still the youngest head coach in the NFL. He’s amassed a 55-26 record in the regular season and has yet to post a record worse than 9-7 in an individual year. If McVay wants to keep coaching, chances are the Rams will let him do so for as long as he wants.