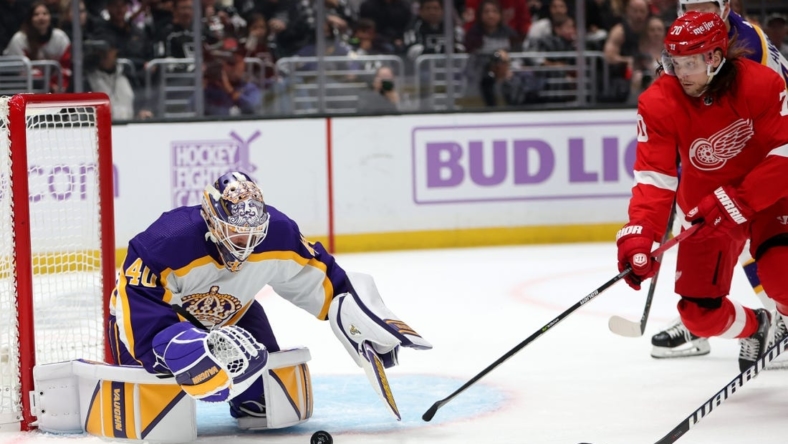 Defenseman Sean Durzi scored a pair of goals in the second period and the Los Angeles Kings swept their four-game homestand, hanging on to beat the Detroit Red Wings 4-3 on Saturday.

Los Angeles’ victory was its sixth straight over Detroit. The club is 5-0 against the Eastern Conference’s Atlantic Division.

Detroit’s Dominik Kubalik had a power-play goal and an assist, and Filip Hronek scored and had a helper. Dylan Larkin tallied on the man advantage, and netminder Alex Nedeljkovic made 17 saves. David Perron recorded two assists to give him 401 for his career.

Donning their white Reverse Retro 2.0 jerseys with the gold and purple trim for the first time, the Kings took only nine seconds to make a strong impression in their new ensemble.

Rasmus Kupari won the opening faceoff, and Alexander Edler immediately dished it back to the Finnish center to start a two-on-one break. Kupari then fed Grundstrom for his fourth goal of the season.

Four minutes later, the Red Wings evened it when Kubalik netted his seventh goal on the game’s first power play. He one-timed a pass from Hronek that slipped through Petersen’s pads — one of just four Detroit shots in the period.

The scoring increased when Los Angeles went on its first man advantage at 12:26 of the first. Fiala potted his fifth goal 55 seconds later for a 2-1 lead.

In the second period, just three seconds after the Kings’ second power play ended, Durzi found a long rebound in the left circle and fired home a tally at 6:23 for a 3-1 lead.

Durzi actually was able to cash in on the next man advantage. The blue liner fired a long, knuckling slap shot that fluttered past Nedeljkovic for his third goal to make it 4-1 at 13:41.

In the final frame, Larkin finished off a feed from Oskar Sundqvist for a second power-play goal and his seventh overall. The tally at 1:57 clipped the lead to 4-2.

Detroit pulled Nedeljkovic with over four minutes to go for the extra skater, and Hronek hit the net at 17:59. But the Kings stood strong in their end and held on for the two points.