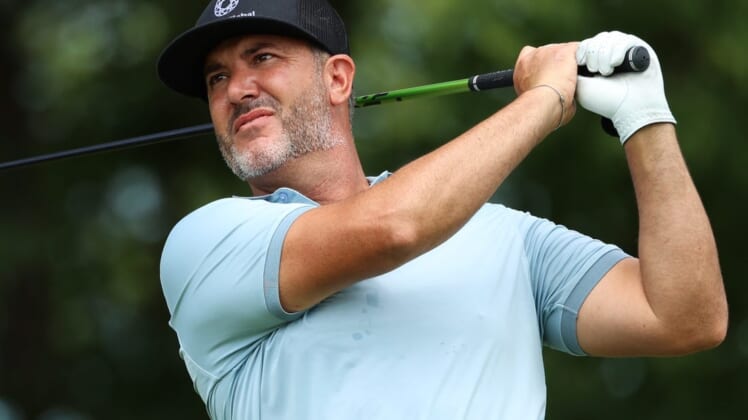 Scott Piercy kicked off his round with four straight birdies en route to a bogey-free, 7-under-par 64, which secured him a three-stroke lead after two rounds of the 3M Open at TPC Twin Cities in Blaine, Minn.

Piercy, at 13-under 129, leads Argentina’s Emiliano Grillo (65 on Friday) by three going into the weekend. Englishman Callum Tarren shot an 8-under 63 for the round of the day, vaulting him into third place at 8 under.

Piercy shared the first-round lead with Sungjae Im of South Korea and wasted no time separating himself from the pack early in Friday’s round. He started on the back nine and made a 27-foot birdie putt at the par-4 10th, jumpstarting a string of four birdies.

The 43-year-old added birdies at the second, sixth and seventh holes.

“It’s been a little bit since I’ve played like I feel like I should play,” Piercy said. “To kind of prove it to myself again, I know it’s in there, it’s just like, ‘OK, how do we get it out of me?’ There’s a lot of business to take care of this weekend, but to come out the first two days and do what I did gives me a lot of confidence going into the weekend.”

Piercy has won four times on tour, but not since 2018 at the Zurich Classic of New Orleans, a team event. He’s also in position to land his first top-10 finish of the season.

Grillo drained a 40-foot eagle putt at the par-5 sixth to get his round moving. He also made five birdies on the day against just one bogey.

“I think I was able to manage the ball pretty well and I was able to make the putts when I had the chance,” Grillo said. “Obviously that one on 6, it’s a big plus to steal two and it’s a hole that’s kind of hard to get in two, so solid day.”

Tarren, ranked No. 335 in the world, posted his 63 by making four birdies on the front nine and four more on the back without a bogey. He earned his PGA Tour card at the end of last season and has two top-10 finishes on the year.

“I played solid at the John Deere, finished sixth,” Tarren said. “I think I can draw off that because Sunday didn’t quite about go my way, I missed a couple of shots coming down the stretch, but I think my mindset over the weekend is just going to be pedal to the floor.”

The top 65 and ties made the 36-hole cut of 1 over par. Fan favorites Rickie Fowler and Australian Jason Day snuck in at even par through two rounds after carding 72s. Defending champion Cameron Champ made the cut on the number after shooting a 68 Friday.

Retired tennis pro Mardy Fish, a 3 handicap who often competes in celebrity pro-ams, played the 3M Open in his home state of Minnesota on a sponsor exemption. Fish shot an 81 Thursday and a 74 Friday, missing the cut at 13 over par.