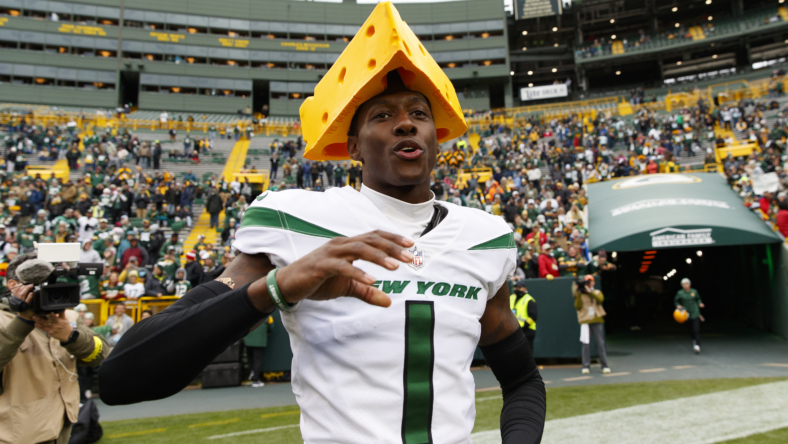 The No. 4 overall pick of the New York Jets back in April, cornerback Sauce Gardner already looks like an All-Pro performer. The division-rival Miami Dolphins found that out during a Week 5 Jets win.

Remaining in the AFC East for Sunday’s Week 9 game against the Buffalo Bills, Gardner and his Jets were looking to make a statement. After all, Buffalo is seen as one of the top Super Bowl contenders roughly half way through the season.

Down 14-10 in the third quarter, Gardner made a game-changing play by picking off MVP candidate Josh Allen.

We’re really not too sure what Allen was doing here. It had to be a bit of miscommunication. Even then, Gardner’s play on the ball and return led directly to a Jets touchdown and a 17-14 lead late in the third quarter.

It’s simply amazing to realize what Gardner has done thus far as a rookie. Typically, first-year cornerbacks struggle with the nuances of the NFL game. That has not been the case for Gardner as he’s helped lead a vastly imporved Jets defense.

It was just last season that New York’s defense ranked dead last in the NFL in points allowed at nearly 30 per game. Opposing quarterbacks threw 28 touchdowns against seven interceptions while boasting a 103.2 passer rating against the Jets.

What we’re seeing this season is a much different story. Heading into Sunday’s game, New York ranked 11th in points allowed. Opposing quarterbacks had thrown nine touchdowns against nine interceptions. Gardner is one of the primary reasons for this.

Forget about winning NFL Defensive Rookie of the Year, Gardner will likely be an All-Pro when all is said and done. He’s been key to the Jets 5-3 start to the season, too.