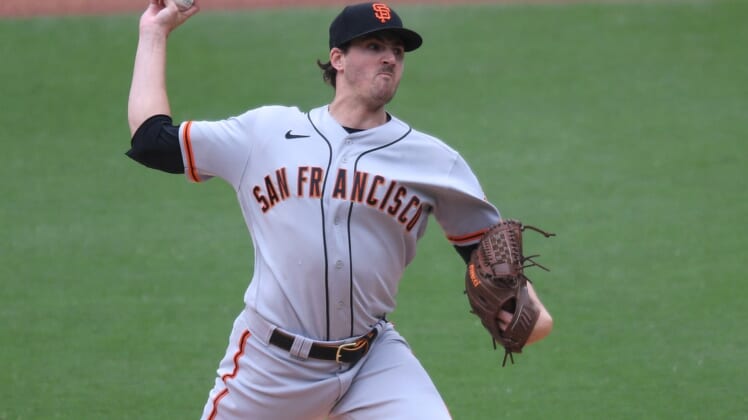 Mike Tauchman hit a home run and drove in four runs and Kevin Gausman held the Padres to a Fernando Tatis Jr. solo homer over six innings Sunday afternoon as the San Francisco Giants defeated the Padres 7-1 in San Diego to hold onto first in the National League West.

The Padres had beaten the Giants in the first two games of the three-game series.

Gausman (2-0) allowed one run on six hits and a walk with six strikeouts to pick up the win. The right-hander also had a hit and scored twice.

Tatis’ eighth homer gave the Padres a 1-0 lead in the first.

Tauchman, who was acquired from the Yankees last Tuesday in a trade for Wandy Peralta, capped a four-run Giants third with a three-run homer, his first in the National League.

Curt Casali drew a walk to open the inning off Joe Musgrove, who was named the starter Sunday morning. Gausman then bunted back to Musgrove on a sacrifice attempt, but the pitcher fumbled the ball trying to get the force at second for an error. Tommy La Stella singled home Casali and Tauchman followed by pulling a drive into the right field seats.

Gausman singled to open the fifth and scored on La Stella’s triple to left center. La Stella scored on Wilmer Flores’ ground out, although he hurt his left leg approaching the plate and left the game.

Tauchman added a fourth RBI in the ninth when he drew the fourth walk in the inning by Padres’ reliever Aaron Northcraft to force home the final run.

The Padres out-hit the Giants 8-5 and left eight runners on base over the last seven innings.